Seifert: Great to get victory at last-minute like that

Tim Seifert won the man of the series as New Zealand shocked India to claim the T20 series 2-1.

Tim Seifert won the man of the series as New Zealand shocked India to claim the T20 series 2-1. Seifert, a relatively unknown name in international cricket, finished the series with 139 runs at a strike rate of 173.75, as New Zealand won the decider at Seddon Park. 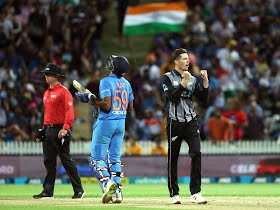 Seifert smashed 84 from 43 in the opening T20 and then featured in the 80-run opening stand with Colin Munro in the deciding T20. It went a long way in New Zealand clinching the series.

“Great to have a performance like that, but it’s great to get a victory, particularly a last-minute one like that. Great to have batted with Colin Munro,” Seifert said at the post-match presentation ceremony.

On the full house at Seddon Park, Seifert said it was an amazing feel. “It’s awesome in my hometown, that the crowd have come out in full support. Hopefully, they do so for the Super Smash final as well,” he added.

After a long run away from home, India will now host Australia at home.