Going into the Centurion one-dayer, South Africa were under immense pressure. They had lost the Test series to England even though they were victorious in the final Test. After this, they were thrashed in the first two one-dayers as well, and rather mercilessly at that as England's batsmen, in particular, outshone the hosts. A loss at Centurion would have meant another series loss for them at home. However, with plenty of pride at stake, South Africa pulled out their best game with the bat, and put the England bowling to the sword. It was the kind of dominating effort to reassure the South African fans that this is only a temporary poor phase. 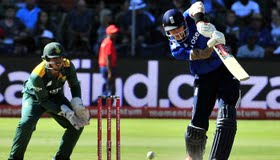 The most impressive aspect of South Africa's triumph in the third match was undoubtedly the manner in which Hashim Amla and Quinton de Kock batted. Batting first, England had put up a rather imposing score on the board. The pressure was even greater on the hosts since this was a do or die game. But, de Kock and Amla batted as if they were having a stroll in the park. There have been a number of massive partnerships between de Kock and Amla in recent times, and this was an addition to the same. De Kock now has 10 hundreds in 55 matches, and definitely heading toward ODI greatness.

The splendid partnership between Amla and de Kock meant that South Africa did not need their other key batsmen to contribute. But, South Africa would be pleased with the fact that both AB de Villiers and Faf du Plessis are among the runs. They would be expecting a big knock from Rilee Rossouw as well. With the ball, they have some issues to deal with. Kagiso Rabada and Kyle Abbott have been getting wickets, but they haven't been able to stop the flow of runs. The biggest worry though would be the form of leg-spinner Imran Tahir, who has been easily taken away for runs. Tahir needs to show significant improvements.

In spite of losing at Centurion, England would still be a confident lot as they head into the Johannesburg encounter. They batted exceedingly well in the last match as well, with Joe Root compiling yet another impressive hundred. Root has been England's best player across formats in recent times, and England would want the same to continue. Opener Alex Hales and Ben Stokes both got supporting fifties in the previous game, continuing their pleasant form in the series. The irrepressible Jos Buttler had a rare failure at Centurion, and that cost England as they couldn't finish on a high. England would look at that as a one-off.

Like South Africa, England's bowling also suffered at the hands of the batsmen on a batting beauty in the previous match. In fact, apart from Adil Rashid, who was successful in keeping things tight, no other England bowler could make an impact on Amla and de Villiers. Everyone from Chris Jordan to David Willey and even the otherwise reliable Ben Stokes have struggled. While England would look at the Centurion loss as a one-off, South Africa would be keen to exploit the lack of cutting edge in the English line-up. The visitors still hold the edge, but has the Amla-de Kock partnership turned the tables? We will know soon.