Although the India-South Africa ODI series finished with a 3-2 margin in favour of the visitors, the Proteas were undoubtedly the dominant force in the series, which culminated with a massive win for them at the Wankhede stadium

Although the India-South Africa ODI series finished with a 3-2 margin in favour of the visitors, the Proteas were undoubtedly the dominant force in the series, which culminated with a massive win for them at the Wankhede stadium in Mumbai. Cricwaves digs deep and lists down five factors that cost India the one-day series.

Dhawan's troubles at the start: Although Rohit Sharma displayed some impressive form in the earlier games, the struggles of Shikhar Dhawan hurt India in a big way. India did not get even one swift start to the innings. Not only did Dhawan fail to get big scores, he also ate up a lot of deliveries for his insignificant runs. As a result, India never got any momentum going. This put additional pressure on Rohit, and the following batsmen. As the series progressed, Rohit lost his form as well, and though Dhawan got a fifty at Mumbai, it was of no consequence. 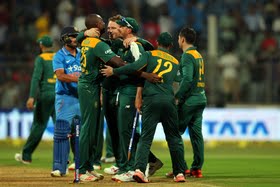 Slack in slog overs: On two occasions in the series, India lost matches from winning positions, both times chasing. This was because they failed to adapt to the new field restrictions in place. But, their overall batting approach in those overs was also poor. There was no plan in place, and the block and slog policy was bound to fail. On the first occasion, Dhoni blamed the pitch, on the second, he put it down to the new rules. The problem though lies much deeper.

No runs for Raina: Like Dhawan, Suresh Raina, another southpaw also failed to make an impact. He too crossed fifty only once. In fact, after the first three games, his runs tally for the series hadn't even reached double figures. His woes against the short ball were exposed again by the pacers, and Imran Tahir foxed him a couple of times rather easily. Raina mostly came into a situation where he had to go for quick runs. It is something in which Raina has flourished in the past. Against the Proteas, he was like a sitting duck.

Shoddy pace bowling:The two matches India won in the series had a lot to do with some very good spin bowling from the trio of Harbhajan Singh, Axar Patel and Amit Mishra. In a similar vein, their losses can be put down to some extremely shoddy pace bowling. Bhuvneshwar Kumar had his most forgettable international series till date, and was torn apart with ease. Umesh Yadav was so bad that he had to be dropped after the first three games, and even Mohit Sharma couldn't make much of an impression when he played.

Unimaginative Dhoni: When was the last one referred to Dhoni as captain cool? The Indian skipper seems past his sell-by date. The same was evident as Dhoni looked clueless numerous times, both in the field, and while batting. There were no out of the box ideas as leader, and he even seems to have lost his ability to hit the big ones. He did get a 92 in one of the matches, but even that was more of a laboured effort. Take that out, and Dhoni had precious little to cheer.