India win by 6 wickets in Mohali over Australia. India take the series as they lead 3-0 with one game to play.

Very well deserved Man of the Match for Dhawan. Created history for fastest 100 on debut

Dhoni and jadeja shared a 20 runs partnership in 8 balls in IPL style... IPL is just a few days ago.

All 10 Tests-in which MS Dhoni has led India vs Australia- have produced results. Won all 7 in India, lost all 3 in Australia.

Shikhar Dhawani Says: "I would like to thank god and my family, It's s dream come true. When I entered, I was nerbous for three-four balls. Once I got into my rhythm, I played my natural game. Vijay did a great job too. I wanted to stay at the crease as long as possible, I didn't want to throw my wicket away. I will cherish this for the rest of my life. The finger is going to take a bit of a time. It's all part and parcel of the game. I fell on my knuckles when I dived."

MS Dhoni says: "We don't think about revenge in sport, We have exploited the conditions well. Even the fast bowlers have done well despite conditions helping spinners. Jadeja's inclusion has helped. It meant we were playing with five specialist bowlers. We bowl 12-125 overs on an average to get teams out, so we get tired. It was one of the best batting exhibitions when it comes to batting in pairs, Vijay and Dhawan. The pitch got better to bat on a bit. There were foot marks, but I don't think it was alarming. Bhuvnesh's wickets in the second innings helped us win the game. We may try a few things in Delhi but it is important to win all Tests."

Michael Clarke says: "I think we showed character, But we have to give credit to India. The start that Dhawan and Vijay gave was outstanding, and all credit to them. The way we came out and fought with the ball today is amazing, but once again the Indian batters showed us that once you get in, you have to score big. We are disappointed, but hopefully we can finish on a high in Delhi. Over the past two years, we have been consistent at home, but not away from home. We continue to learn, there are some positives but there are certainly areas we can get better. I told the boys this morning that we can win the match. We always look for ways to win."

What a debut for Dhawan. Australia form a beeline to shake his hands. He may still be wanting to pinch himself to make sure this is for real. Walks off giving his mo' a twirl. He just came out playing his shots but playing them all along the ground. He didn't loft a single solitary ball until he reached his hundred. It's the quickest by a debutant. His 33 fours are only four behind the most on debut. He can notch up one of the five fastest double-centuries of all time, and he can also go on and score the highest score by a debutant. 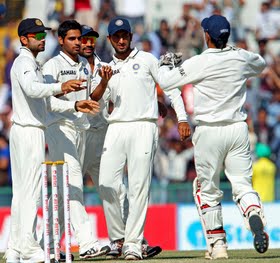 196* stand b/w Dhawan-Vijay is the highest for India' opening against Australia in Tests, beating 192 Chauhan-Gavaskar Mumbai 1979.

Phil Hughes against spin: 70 balls, 2 runs, Out 5 times. He is the one Aussie player who SHOULDN'T be playing on the subcontinent.

1.India have won three Tests in a series for only the fourth time (first against Australia). Their previous two such series wins came against England (1993) and Sri Lanka (1993-94).

3. Australia have lost the first three Tests of a series for the first time since the home series against West Indies in 1988-89. They have been whitewashed in a series of three or more matches only twice (South Africa in 1969-70 and Pakistan in 1982-83).

4. India have now won their last three Tests against Australia in Mohali. Their only loss at the venue was in 1994 when West Indies won by 243 runs.

5. Australia have now lost 13 times after scoring 400-plus in the first innings (batting first). Five of the last six such defeats have come against India.

6. Ravindra Jadeja dismissed Michael Clarke for the fifth time in the series. This is only the fourth time that a batsman has been dismissed five times by a particular bowler in an India-Australia series. Among spinners, only Anil Kumble has dismissed Clarke more often (six times).

7. Australia's last-wicket pair added 44 runs in 109 balls. The number of deliveries faced is the fifth-highest for a last-wicket stand for Australia (second-highest against India).