Cook lays strong foundation for England in reply to India's 316

England are in a dominant position in the Eden Gardens Test after finishing the Second Day’s play at 216 for 1 with just another 100 runs to knock out India’s first innings efforts. Skipper Alastair Cook remained unbeaten on 136 (from 236 balls with 19 fours and a six) to lead England’s strong reply.

England are in a dominant position in the Eden Gardens Test after finishing the Second Day’s play at 216 for 1 with just another 100 runs to knock out India’s first innings efforts. Skipper Alastair Cook remained unbeaten on 136 (from 236 balls with 19 fours and a six) to lead England’s strong reply. With 23 Test centuries under his belt, Cook is now the highest century getter for England in Test Cricket. At the age of 27, the English Captain also went onto become the youngest player to score 7000 Test runs beating the previous record held by Sachin Tendulkar.

England finished the second day’s play at 216 for 1 in 73 overs. The problem for India by the close of play on Day 2 is that even Jonathan Trott who had struggled in the Series so far has started to find some form in his unbeaten 21 (from 67 balls). India could continue to have a long leather hunt if the English batsmen continue to make merry tomorrow as well with the pitch looking very flat. 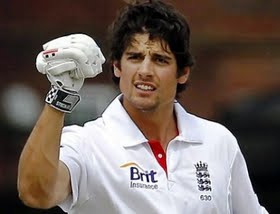 The only wicket to fall in the 73 overs of the English first innings so far is that of Nick Compton. The 29-year-old opener Compton registered his maiden Test fifty. After scoring 57 (from 137 balls with 6 fours and a six), Compton was adjudged lbw to Pragyan Ojha after missing a predetermined paddle sweep to a full ball infront of off. Compton’s dismissal was a bizarre moment as Umpire Rod Tucker shook his head to suggest it was not out but then raised his finger to give the lbw. The opening stand for England was worth 165 runs in 53 overs.

Tea on Day 2: England have put India in massive trouble with an unbeaten century stand from its opening batsmen. Alastair Cook once again looks rock solid to finish the afternoon session on 80*. His partner Nick Compton showed few signs of aggression in his otherwise sedate knock of 41*.

England are sitting pretty at 121 for no loss in 41 overs. India missed out three chances in the post lunch session – one was Pujara dropping a low catch at first slip when Cook got a rare edge off Zaheer and then a couple of close run out opportunities went begging.

Lunch on Day 2: England made a steady start of 22 for no loss in 11 overs having bowled out India for 316 in the first half of the morning session. It wasn’t an action packed morning session except for a couple of big sixes tonked by Skipper MS Dhoni off Monty Panesar. Dhoni scored a 27th Test fifty before he fended off a nasty snorter from Steven Finn to gully.

India added 43 runs this morning before losing its remaining three wickets. Zaheer Khan, the overnight batsman was lbw to an arm ball from Monty fired in at middle. Ishant Sharma didn’t trouble the scorers in his 3-ball stay as he was yorked by Monty. Last man Ojha faced 19 balls and remained unbeaten and in the process helped MS Dhoni to finish with a personal score of 52 (from 114 balls with 5 fours and 2 sixes).

Monty Panesar missed out in picking up his third consecutive five-wicket haul. He settled with figures of 40-13-90-4 to help England bowl out India for 316 in 105 overs.

Build Up to Day 2: After a good first day’s play, England have the initiative of taking the match away from India in the Third Test at Kolkata. India are on the mat at 273 for 7 with the second new ball very fresh. England will be looking to wrap up the Indian 1st innings and then put on a solid show with the bat. It will be a tough task for Team India to bounce back in this Test Match – for starters, they would need to get to 350 perhaps with Dhoni required to do some magic and then the bowlers will have to get the English batsmen out cheaply.

The pitch at the Eden Gardens has been good and India has just batted poorly on Day 1. The thing that will be crucial for the bowling team is the reverse swing which is on offer because of the abrasive nature of the pitch. James Anderson used it perfectly yesterday, so it is upto the pair of Zaheer and Ishant to use it to their advantage today.