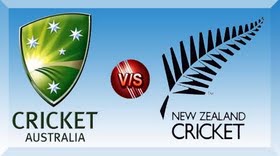 Pitch Condition:The dimensions of the ground have been much talked about in the days leading into the match. The scores, though, have not been unworldly high - last year there was a tie involving India where 314 was scored, but before that there had only been three 300-plus totals in 15 matches.

New Zealand vs Australia, 20th Match at Auckland, 28 Feb, 2015Australia have won their previous two matches at Eden Park, back in 2010, but in 2005 they lost a high-scoring encounter when New Zealand chased down 337 with eight balls to spare. Taylor made 117, which remains his highest score against Australia, and McCullum hit the winning runs.

Since January 1, 2014, Corey Anderson, McCullum and Luke Ronchi hold the top three strike-rates for batsmen with more than 500 runs

Clarke has played two ODIs in the last 12 months