The Indian selectors announced the Test squad for the first two matches against England on Wednesday. A lot of surprises were not expected to be sprung, but there was one big one for sure

The Indian selectors announced the Test squad for the first two matches against England on Wednesday. A lot of surprises were not expected to be sprung, but there was one big one for sure, the selection of all-rounder Hardik Pandya. Nobody apart from the selectors would have had an inkling of what was in store until Pandya's name was announced. Pandya tasted success on his one-day debut, and has had a mixed run in the few T20s that he has played. But, to blood him into the Test format so early in his career is undoubtedly a big punt that the selectors have taken. It remains to be seen whether Pandya can repay the faith reposed in him.

Speaking of Pandya's inclusion, chairman of selectors MSK Prasad explained, "Pandya's pace has increased, he is moving the ball, his batsmanship has improved. And he has mellowed down as a person. He is one allrounder we thought is an equally competent bowler and batsman. And a good fielder too. Rahul Dravid has worked hard on the mental side of his game. Now Anil Kumble is guiding him. We have three all-rounders - Stuart Binny, Hardik Pandya, Rishi Dhawan. In this particular series, he scores ahead of Binny. Much quicker and better bowler than Stuart. With form and fitness, Hardik is a better option."

Being hit by injuries, a number of key players will be missing from action in the first two matches. Rohit Sharma injured his thigh during the final one-dayer against New Zealand while Lokesh Rahul's hamstring is yet to heal. Shikhar Dhawan fractured his thumb during the second Test, and still remains out of contention. Even if he was fit, one wonders if the selectors would have gone for him. The other player on the non-fit list is Bhuvneshwar Kumar. He had suffered a hamstring during the second Test against New Zealand, and has been out of action subsequently. While he has recovered from injury, lack of match practice has kept him out.

The injuries to both Dhawan and Rahul have proved to be a blessing in disguise for Gautam Gambhir. With both of them out, Murali Vijay was the only genuine opener in the side. The circumstances mean Gambhir gets a chance to extend his Test career. He had a decent outing in the third Test against New Zealand, but the big score was missing. Gambhir will be keen to grab the godsend opportunity against England. His previous comeback in Tests was against the same opponent in English conditions. It was a disastrous one, so Gambhir would be keen to make amends on that front as well. 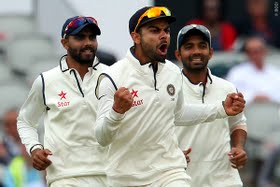 As expected, Ishant Sharma makes his comeback into the team, after being declared fit. He is the most experienced pacer in the team at present, so there would be big expectations from him. Despite a poor show against New Zealand, the selectors have retained Umesh Yadav, dropping instead the untested Shardul Thakur. Although he is not expected to play a big role in the series with Ravindra Jadeja and Ravichandran Ashwin back in the thick of things, newbie spinner Jayant Yadav retains his place. And so does Karun Nair as a back-up to the strong batting line-up led by skipper Virat Kohli and boosted by Cheteshwar Pujara, Ajinkya Rahane and Wriddhiman Saha.