Stats: Heaviest defeats for India in terms of runs

India’s 161-run defeat to Sri Lanka on Tuesday at Kingston, Jamaica was the sixth heaviest loss for India in terms of runs.

India’s 161-run defeat to Sri Lanka on Tuesday at Kingston, Jamaica was the sixth heaviest loss for India in terms of runs. Batting first in the game, Lanka amassed 348 for the loss of just a solitary wicket in their 50 overs to which India responded with an unimpressive 187. It is a kind of loss that the Indians would find difficult to forget in a hurry. Here’s a look at India’s top five heaviest ODI defeats in terms of runs. 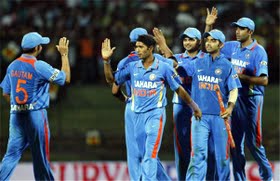 This was the final of the 2000 tri-series in Sharjah, and India were embarrassed by the Lankans to say the least. Having won the toss and chosen to bat, the Lankans amassed 299 for 5 in 50 overs. Amazingly, skipper Sanath Jayasuriya alone got 189 of those runs. He batted for 161 balls and blasted 21 fours and four sixes. Jayasuriya was well supported by Russel Arnold, who contributed an unbeaten half-century. Chasing exactly 300, India were bundled out for 54 with Chaminda Vaas grabbing five wickets and Muralitharan claiming three scalps. Robin Singh was the only Indian batsman to reach double figures. He made 11.

In the second VB series final, the Aussies batted first and amassed 359 for 5 in their 50 overs. Opener Matthew Hayden slammed 126 from 122 balls with the aid of 11 fours and three sixes. Hayden was well-supported by Damien Martyn and Andrew Symonds, who made 67 and 66 respectively. India were poor in reply, and were rolled over for 151 inside 34 overs. Irfan Pathan top scored for India with 30 while four Aussie bowlers claimed two wickets each.

England batted first in this World Cup game, which was among the earliest ODIs, and amassed 334 for 4 in 60 overs. Dennis Amiss smashed 137 in 147 balls while Keith Fletcher made 68 from 107 balls. India managed only 132 for 3 in reply. This was the infamous match inwhich Sunil Gavaskar batted out the entire duration of 60 overs and made 36 having faced as many as 174 balls. Anshuman Gaekwad and Gundappa Vishwanath made 22 and 37 respectively.

The Kiwis batted first in this game, which was part of a tri-series, and raked up 288 in their 50 overs. The innings was built around skipper Ross Taylor’s 95 and Scott Styris’ 89. India were bowled out for 88 in reply. Ravindra Jadeja was the top scorer for India with 20. Daryl Tuffey picked up three wickets for New Zealand while Kyle Mills and Jacob Oram grabbed two each.

This was a group game of the 1983 World Cup. The Aussies batted first and compiled 320 for 9 in their 60 overs, Trevor Chappell making a century and Kim Hughes and Graham Yallop contributing half-centuries. India managed only 158 in reply, with Kapil Dev’s 40 being the top score.