Former India captain Anil Kumble opines that Jasprit Bumrah has it in him to become India's greatest fast bowler in the times to come. Bumrah has had an extraordinary start to his Test career, after an impressive start to his limited overs career.

Bumrah impressed in South Africa, came up with match-winning efforts in Australia during the historic series triumph Down Under and was unplayable in West Indies in the recently-concluded series.

The lanky India pacer who has featured in 12 Tests became only the third Indian bowler to claim a hat-trick during the series in West Indies. Bumrah ended the Test series with 13 wickets at 9.23 in two Tests.

He claimed 5 for 7 in Antigua and another five-for in Jamaica, which included the hat-trick, as India romped home to wins in both the Test matches. 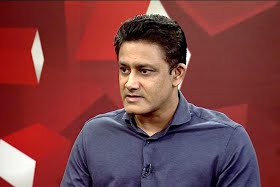 In an interview with CricketNext, Kumble was all praise for Bumrah and says he has greatly matured as a player. "He is a lot more consistent, he knows how to get a wicket. It is not just about the skillset you have or you possess the ability to bowl in, away or a bouncer."

Kumble went on to add, "I think the ability to bounce back and what to do when I think Bumrah has done that brilliantly and he is a great student of the game, he understands the nuances, he bowls differently to different batsmen assesses those conditions really quickly and that has been the ability of Jasprit Bumrah in this series."

The former India coach also admitted that he does see a future great fast bowler in Bumrah. "Yes, he certainly has the quality to go on and become the greatest ever fast bowler from India. I think that is something that he has and you can see those shades early in his career. He is only 25 so he has a long way ahead of him and you know it is wonderful to see the kinds of performances he has put together," Kumble further said.

The Indian legend added that Bumrah along with Mohammed Shami and Ishant Sharma have played a major role in India’s solid Test performances over the last few years.

In the interview with CricketNext, Kumble also stated that the selectors must have a clear talk with MS Dhoni regarding his future, whether they think he fits the fill for the upcoming World T20.

“I’m not really sure. I think Pant has certainly made a lot of claims as a keeper-batsman, especially in the T20 format. So, it’s important to have a conversation and you need to have a proper send-off, he certainly deserves that,” Kumble told CricketNext.

Kumble however admitted that with Pant showing inconsistency selectors must take a call over whether they what to look forward or go back to Dhoni. "If the selectors believe that Dhoni is in the scheme of things for the T20 World Cup, then I think he should be playing every game," Kumble concluded.