Kohli has won nothing as leader, has lots to achieve: Gambhir

Indian captain Virat Kohli may be rated by many as the best batsman in the world today. He averages over 50 in all three formats of the game with 43 ODI tons and 27 in Tests. Most cricket pundits admit that the 31-year-old has the best chance of breaking Sachin Tendulkar's record of 100 international hundreds.

Former India opener Gautam Gambhir, however, believes that Kohli has everything to prove as a captain as he has neither won any ICC tournament as leader nor the IPL while captaining Royal Challengers Bangalore.

Speaking on the Star Sports show 'Cricket Connected', Gambhir stated that cricket is a team sport at the end of the day, and thus Kohli still has plenty more left to achieve. 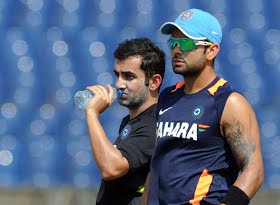 “You can keep scoring your own runs. There are people like Brian Lara who’s got so many runs. People like Jacques Kallis who have won nothing, Virat Kohli, at the moment, has won nothing to be honest, as a leader,” Gambhir pointed out.

“He has a lot to achieve. He can keep scoring his own runs. But for me, in a team sport, till the time you don’t win those big trophies, you will never be considered... probably you will never fulfill your entire career,” Gambhir further added.

Gambhir also advised Kohli to be mindful of the fact that other players in the team do not have the same ability as he has. And thus, he must understand and deal with them accordingly.

“He’s different from the rest. Probably a lot of other people might not have the same ability that Virat Kohli has. As a leader, the most important quality which he needs to have is start taking players as they are. Don’t compare them, or don’t compare their intensity to his intensity. Because every individual is different,” Gambhir explained.

According to Gambhir, who was the top-scorer in India’s 2007 T20 World Cup and 2011 World Cup final triumphs, Kohli needs to figure out how to get the best out of his players. Only then can the team win world titles.