Pakistan in massive trouble after SL's 472

Pakistan are in disarray at 48 for 5 at stumps on Day 2 in reply to Sri Lanka's first innings score of 472. Nuwan Kulasekara and Suraj Randiv did irreparable damage to the visitors as both the bowlers picked up two wickets in two consecutive deliveries in their respective spells.

Stumps on Day 2: Pakistan are in disarray at 48 for 5 at stumps on Day 2 in reply to Sri Lanka's first innings score of 472. Nuwan Kulasekara and Suraj Randiv did irreparable damage to the visitors as both the bowlers picked up two wickets in two consecutive deliveries in their respective spells. Pakistan are now in a massive hole with a huge deficit of 424 runs to wipe off with not much of batting left.

The Pakistani innings was off to a bad start when Taufeeq Umar (9) offered no shot and padded up to a Nuwan Kulasekara inswinger which had him lbw. In the very next ball, Azhar Ali was forced to nick Kulasekara’s away going delivery off the backfoot to the keeper to leave Pak at 17 for 2.

After Kulasekara’s double blow, Pakistan settled down through a partnership between Mohammad Hafeez and Younis Khan. The day’s play was coming towards a possible end as dark clouds hovered around Galle. Batting wasn’t that easy under the fading light and Sri Lanka resorted to spin at both ends with Suraj Randiv joining Rangana Herath.

In the 21st over, Mohammad Hafeez (20 from 56 balls) made a big mistake by going back to a full ball which had him lbw to a top spinner from Suraj Randiv. The next ball, Pakistan lost its fourth wicket when night watchman Saeed Ajmal (0) was wrongly given caught bat pad at shortleg to a sharp turning offie from Randiv. In the next over, Rangana Herath came to the party by inducing a thin edge off Asad Shafiq’s forward defence to the Keeper off a flattish turning delivery.

Pakistan finished the second day’s play at a disastrous 48 for 5 in 24 overs with Younis Khan (15* from 58 balls) along with debutant Mohammad Ayub (1*). 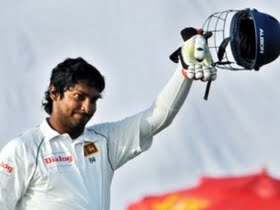 Sri Lanka bowled out for 472 in 153.2 overs: The final session began with Kumar Sangakkara eying a double century but left with only two tail-enders. Unfortunately, Sangakkara was left stranded on 199 with no.10 Herath getting run out and no.11 Nuwan Pradeep clean bowled by a straighter one from Mohammad Hafeez. Sangakkara’s unbeaten 199 came in 387 balls with 18 fours and 2 sixes. For the visitors, Saeed Ajmal finished with 5 for 146 in 46 overs while Skipper Hafeez contributed with 3 for 55 in 19.2 overs.

Tea on Day 2: Sri Lanka slipped to 439 for 8 in 141.5 overs at Tea on Day 2. Kumar Sangakkara is still there though, batting on 170 (from 335 balls with 17 fours). The afternoon session saw three wickets go down along with a brief rain break that hardly lasted 20 minutes.

Pakistan’s first breakthrough in the session came almost immediately after play resumed after a rain break. Prasanna Jayawardene (48 from 87 balls with 8 fours) departed after he edged a cover drive off a straighter one from Hafeez to the keeper to end a crucial 80-run stand with Sangakkara which took SL to 415 for 6.

At the stroke of Tea, Sri Lanka lost two more wickets in quick time to suddenly head towards a finish to its first innings. Suraj Randiv (8) was caught and bowled by Abdur Rehman after dragging a forcing drive and Nuwan Kulasekara was wrongly given caught bat pad off Mohammad Hafeez’s bowling. With just the two wickets in hand, Sangakkara, who has moved onto 170 will be looking to play his shots and at the same time bring up a double century.

Lunch on Day 2: Sri Lanka were pegged back in the morning session by a brilliant bowling spell from Saeed Ajmal. However, the hosts are still in a good position at 366 for 5 (118 overs) in this Test Match with overnight centurion Kumar Sangakkara batting out the entire session to remain unbeaten on 139 (from 287 balls with 16 fours. Sri Lanka lost three wickets in the first session and could collect only 66 runs in 28 overs.

It took around 40 minutes for Pakistan to find their breakthrough on Day 2. Skipper Mahela Jayawardene (62 from 132 balls with 9 fours) was the man to be dismissed first when he went for a slog sweep to Saeed Ajmal but only to miss a doosra and get his off stump shaken up. Mahela’s partnership with Sangakkara was worth 128 runs for the 3rd wicket.

Just a few minutes after getting Mahela bowled, Saeed Ajmal produced a lovely tossed up doosra from round the sticks which dragged Thilan Samaraweera (6) out of his crease in a drive and went past his outside edge to have him stumped out in the 104th over. In the very next ball, Ajmal seemed to have turned the match on its head when Angelo Mathews dragged his drive back to him to spoon a tame return catch for a first ball duck. Sri Lanka were reduced to 335 for 5 but by lunch time, Wicket Keeper Prasanna Jayawardene calmed the situation along with Sangakkara.

Build Up to Day 2: Sri Lanka are in a strong position to pile up a massive first innings total in the opening Test at Galle after finishing Day 1 at 300/2. The second new ball is fresh and that will be something to watch out for the two well set batsmen – Sangakkara (111*) and Jayawardene (55*).

It rained overnight in Galle and Day 2 is likely to see some light rain.