Considering the manner in which Australia pounded the Indian bowlers in the 3rd ODI, it was surprising that the same team was retained for the remaining four games.

Considering the manner in which Australia pounded the Indian bowlers in the 3rd ODI, it was surprising that the same team was retained for the remaining four games. However, logic stated that India must at least try out the untested bowlers in the squad for the fourth one-dayer at Ranchi. Accordingly, Mohammad Shami and Jaydev Unadkat were chosen in place of Ishant Sharma and Bhuvneshwar Kumar respectively. And, even though Australia ended up with a good score batting first in the abandoned game, there were definitely positive signs as far as India’s bowling was concerned. 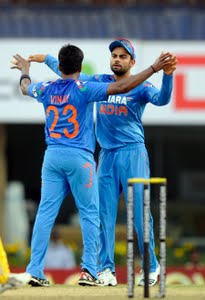 Shami’s performance was the biggest plus. Australia’s top order had been in excellent form in the earlier games, and India definitely needed to strike early. The fact that India won the toss definitely gave them the advantage. There was movement in the pitch and Shami exploited the conditions perfectly. Running in hard, he bowled at a good pace and, more importantly, on a proper length. With the ball doing things, Aaron Finch, Phillip Hughes and Shane Watson all looked in trouble against Shami. The most impressive aspect of Shami’s bowling was that he sent back the trio with wicket-taking deliveries.

Although Australia ended with 295 runs on the board, it was a highly gettable score. A score of anywhere close to 300 is no longer a match-winning total, with the field restrictions in place these days. Also, India have the batting line-up to chase down any score at least at home. The way the openers started, there was definitely every chance of India chasing down the target although we will never know now. Coming back to India’s bowling, Shami apart the attack continued to look pedestrian, which means they still have to work hard on the aspect.

Unadkat, who was also playing his first match of the series, began decently, but did not look threatening. R. Vinay Kumar continued to struggle. Although he grabbed a couple of scalps, there were a number of poor deliveries dispatched to the boundaries. It remains to be seen how long they will persist with the non-performing pacer. R. Ashwin has somehow not got his act right against the Aussies. He seems too jaded. Ravindra Jadeja kept the runs down in the previous game, but at Ranchi, he, Yuvraj Singh and Suresh Raina allowed the pressure built by Shami to be released.

Also, disappointing was India’s fielding performance in the match. Had this been the team of a decade ago, one could understand the number of lapses, but the present Indian side is one of strongest in world cricket. They clearly had an off-day, with two of their best fielders Raina and Kohli dropping catches at crucial moments in the series. They cannot afford such a shabby performance in the future games. Australia are 2-1 up, and with only three games left, they have a significant edge. One more win and they cannot lose the series. Conversely, another loss and India’s hopes of series victory will be thrown out of the window.