Pakistan would be shattered by loss to Zimbabwe

We all know that Pakistan are extremely vulnerable on certain days. But even in their wildest nightmares

We all know that Pakistan are extremely vulnerable on certain days. But even in their wildest nightmares they wouldn’t have imagined going down to the present set of Zimbabwe players in a Test match. Of course, there were dangerous signs when they lost a one day game to Zimbabweans earlier in the tour, but a Test loss seemed farfetched. It did happen though as the underwhelming hosts huffed and puffed their way to a 24-run win. The margin of victory may have been very small. For the Zimbabweans though it means the world.

It goes without saying that Pakistan would be shattered by the Harare defeat. One reason of course is that it came against Zimbabwe of all nations and secondly since it was their abysmal batting more than some exceptional Zimbabwe bowling that was responsible for their shock loss. In both the innings, Pakistan were way below par with the bat. Scores of 230 and 239 in a Test against Zimbabwe tell the story of dejection in itself. Even after getting bowled out cheaply in the first innings, Pakistan should have fancied their chances of winning the Test as they were chasing 264 against a mediocre attack. That they fell short just proves how poorly they batted. 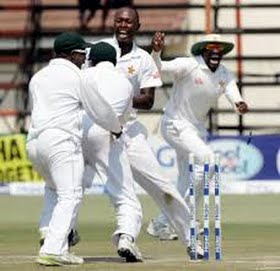 What Pakistan needed while chasing down the target was a cool head. Instead, they stumbled as if they were facing an Australian or English attack. Their approach was bizarre. Khurram Manzoor got a blistering half-century, but he went after the attack as if he was batting in a one-day game. Eventually, the approach caused his downfall, and proved detrimental to the team’s cause. About the others the less said the better. Mohammad Hafeez and Azhar Ali gave their hands away within the first 15 overs of the chase, and Younis Khan was due for a low score after a brilliant series.

It was left to their skipper Misbah-ul-Haq to once again guide the floundering boat. He tried his very best like always, but on this occasion he did not get any support from the lower order, and in the end his long vigil went in vain. Asad Shafiq and Adnan Akmal are not highly experienced, but have been around the Pakistan side for a while, and Misbah would have expected them to come good at least against the Zimbabweans. The fact that they came unstuck is an indication that they aren’t mentally strong as yet to handle extreme pressure.

Pakistan cricket has faced many setbacks over the years. This though would be among the biggest. Their loss can’t be seen as a fluke. A Test match and an ODI loss in Zimbabwe against Zimbabwe, who hadn’t beaten them in ages, are stats that would worry Pakistan cricket no end. Had this come against the Zimbabwean side of the 90s, it would still have been somewhat understandable. But a loss against the likes of Panyangara, Vitori and Chatara – no offence meant, but the fact is that they are mediocre cricketers –would be hard to digest for fans of Pakistan cricket.