Sanju Samson starred with his maiden T20 hundred as Delhi put up a massive 204/5. Captain Zaheer Khan then claimed 3 for 20 as Pune were bundled out for 108 in 16.1 overs. 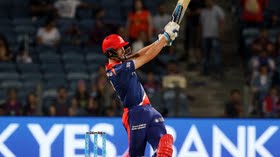 Pune's innings never took off. Ajinkya Rahane fell to Zaheer for 10. Zaheer next dismissed the struggling Mayank Agarwal with a slower ball.

Earlier, it was the Samson show for Delhi as Pune bowlers were carted all over the ground. Samson reached his century with a straight six off Australian leg-spinner Adam Zampa, and smashed five sixes and eight fours in his 63-ball 103.