Sri Lanka completed an easy 9-wicket win to level the ODI Series 1-1 before leaving to Colombo. India couldn’t put up any sort of fight with the ball as the Lankans eased to the target of 139 in just 19.5 overs without playing any real big shots.

Sri Lanka completed an easy 9-wicket win to level the ODI Series 1-1 before leaving to Colombo. India couldn’t put up any sort of fight with the ball as the Lankans eased to the target of 139 in just 19.5 overs without playing any real big shots. Upul Tharanga stayed unbeaten on 59* from 60 balls with 8 fours. His opening partner Tillakaratne Dilshan got out after scoring 50 from 49 balls with 5 fours. Dilshan was caught by the Keeper Dhoni when he dragged a slog sweep off R Ashwin onto the body and lobbed up in the air.

Ashwin was the only bowler to get any sort of respect with figures of 5-1-18-1. The Lankans took just 10.5 overs after the supper break to knock off the remaining 75 runs! The Player of the Match award went to Thisara Perera for his destructive spell at the start of the Indian innings. 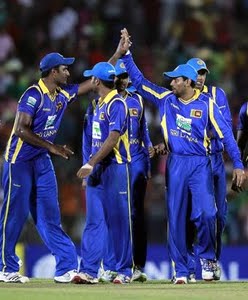 India have been bundled out for a paltry 138 with their innings lasting only 33.3 overs in the 2nd ODI at Hambantota. Thisara Perera and Angelo Mathews wrecked the Indian batting taking three wickets each. Perera had taken his three wickets even before he had conceded a single run!

It was a bad start for Sri Lanka with the ball as Isuru Udana struggled to control the swing in the 2nd over to give away 16 runs which included many wides. Things changed drastically for the hosts when the man with the golden arm – Thisara Perera came in to bowl in the 4th over to dismiss Virender Sehwag (15 from 15 balls) with a superb return catch diving to his right off a mistimed pull shot. India was 31 for 1 in 4 overs at the fall of Sehwag’s wicket. In his next over, Perera found a feather edge from Virat Kohli (1) to the keeper. In the 7th over, Angelo Mathews got a wicket as well when Rohit Sharma (0) dragged a forcing backfoot shot onto the stumps. The visitors in the next over lost Suresh Raina in the same fashion like Rohit, dragging one onto the stumps, this time the bowler getting rewarded was Perera.

India slipped to a hopeless 41 for 4 when the Skipper MS Dhoni joined Gautam Gambhir. Dhoni was put down in the slips very early off Perera. Despite the life, Dhoni couldn’t kick on to come up with a good score, he fell in the 15th over caught behind in a backfoot drive to Angelo Mathews. India lost half its side with just 60 runs on the board. Next to depart was all-rounder Irfan Pathan (6) caught at mid off in a leading edge to a flick off Lasith Malinga. Another all-rounder R Ashwin (21) looked good until he got run out after being sent back from a third run.

The tail didn’t wag at all for India and the end came when Gautam Gambhir was brilliantly caught by a diving Sangakkara off a Lasith Malinga yorker in the 34th over. Gambhir batted well for his 65 (from 96 balls with 4 fours) but just didn’t get any support at the other end. Most of the damage to the Indian innings was done by Thisara Perera (8-3-19-3) and Angelo Mathews (7-2-14-3). Lasith Malinga took two wickets while Rangana Herath chipped in with the scalp of Zaheer Khan.

Toss and Teams Update: India has won the toss and has decided to bat first in the Second ODI at Hambantota. The visitors who go into this match with a 1-0 lead have retained the same XI. Sri Lanka have made one change with left-arm medium pacer Isuru Udana replacing the injured Nuwan Kulasekara.

The pitch for this game has a bit more grass so the ball could come onto the bat better. Dhoni reckons that the pitch will suit the pace bowlers under the lights.