Ajinkya Rahane’s classy 60(45) made sure that Delhi will play Mumbai in the first qualifier and will get two shots at reaching the final. The target in sight was just 153, and Delhi cruised to it with an over to spare.

Shreyas Iyer decided to chase, much to the dismay of many who believed the theory of runs on the board in a crucial game. His decision was backed by his bowlers who bowled tight lines from the word go. Daniel Sams, playing in place of Harshal Patel, bowled his two overs in the powerplay for just 10. Philippe had just managed 12 runs from 16 balls, and tried to take on Rabada in the 5th over, but was caught by Shaw instead. Padikkal was looking in decent touch, even as the skipper Kohli was just finding it a little tough.

The spinners were hardly giving anything away, and with the pressure mounting, Kohi went for the big shot but was dropped by Nortje at long-on. He did manage a four and a six after that, but was dismissed by Ashwin two overs later. The ace Indian offie gave away just 18 in his four overs while also accounting for the big wicket of Kohli. Padikkal then took the charge of hitting the big ones, but was castled by Nortje in the 16th. 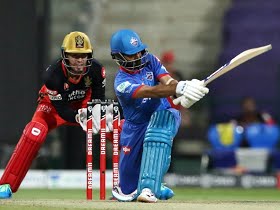 The score at that stage was 112-4, and with just four overs remaining, the onus was on de Villiers to take them past 160. He did hit boundaries against his countrymen Nortje and Rabada, but was run out in the last over trying to retain the strike, but not before he had played a nice little cameo of 35(21). Dube too played his part as RCB crossed 150, to give DC a target of 153.

DC had to start well as they had been losing a wicket inside the first over a lot previously. Dhawan hit a couple of boundaries in the first over, and Shaw repeated the feat the next over before Siraj castled him with a beauty. Dhawan and Rahane, the seasoned batsmen, showed their class and went about their business calmly. Dhawan had lost his touch for the last few games, but regained all that with the required rate hovering around the 7 runs per over mark only. Rahane, who was having a horrific season thus far, showed his class as he swept the spinners in the gaps, and played the inside out shots to perfection.

Delhi were cruising along as they reached 81-1 at end of 10 overs. Dhawan reached his fifty soon but just as runs were flowing, he played the paddle sweep to get out to the left arm spinner Shahbaz. Skipper Iyer and Rahane then played risk free cricket as the equation went down to run a ball. Iyer got a bit too ambitious and holed out to Siraj at long-on, giving Shahbaz his second wicket. Rahane, who had gotten to a fine fifty, too got out playing an uncharacteristic shot - a reverse sweep. 15 runs were required from the final two overs, and RCB were just thinking of pulling a major heist. That didn’t happen as Stoinis struck a maximum and Pant top edged for four, to give Delhi a much needed win and a place in the top two ! Scorecard I Points Table