India's Test pace spearhead, Ishant Sharma, has accepted that he did not do justice to his place when selected in the one-day format.

India's Test pace spearhead, Ishant Sharma, has accepted that he did not do justice to his place when selected in the one-day format. The tall medium-pacer, who was in the news for his over-aggression in the last Test series against Sri Lanka, will be leading the team's attack in the four-Test series in West Indies.

Being frank about his failures in the one-day format, Ishant told bcci.tv, "You have to be honest to yourself and that makes it easier for you to accept things. I have to accept that I didn't do well in shorter formats. But I am doing well in Tests and so I know what my strengths are. It's important to know what your strengths are."

Elaborating on his strengths, Ishant explained that hitting the deck and extracting bounce was his main talent. He also pondered on the difference between his and Bhuvneshwar Kumar's style of bowling. "Bhuvi's strength is swing but he can't extract the bounce like I can do. Similarly, I can't get the ball to swing like Bhuvi," said Ishant, India's most experienced pacer following the retirement of Zaheer Khan.

The medium pacer further goes on to say that the challenges in West Indies will be tough given the hot conditions that are prevalent, as well as the low and slow nature of pitches, which could tire out fast bowlers. At the same time, Ishant stated that it was not an excuse to underperform, and that the bowlers must be ready to toil in all kinds of conditions.

"You have to have enough overs under your belt. You have to work hard enough even if conditions are not favourable. It is easy to give up and say there's nothing in the wicket so spinners will do the job and we will only try to hit the areas. It doesn't work like that. Specially for me, as I like to go flat out whether it is my second or third spell. I love to give my hundred percent," Ishant told the website. 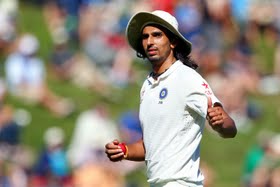 The man, who has taken as many as 68 Tests to claim 201 wickets, revealed that he is very much willing to share his experiences with younger teammates like Umesh Yadav, Bhuvneshwar and newcomer Shardul Thakur.

"I am sharing my experiences and hoping that what worked for me also works for them. But then they have to also identify their areas of sstrength," Ishant further added. The India pacer has often been criticised for not delivering consistently for the team. That is something he would be keen to change during the four Tests against West Indies.