Flashback: When India won the World Cup six years back

April 2, 2011 is a red-letter in Indian cricket. On this day, India recaptured the World Cup of cricket after 28 long years. In a fairy-tale finish, hosts India got the better of Sri Lanka by six wickets at the Wankhede Stadium in Mumbai.

April 2, 2011 is a red-letter in Indian cricket. On this day, India recaptured the World Cup of cricket after 28 long years. In a fairy-tale finish, hosts India got the better of Sri Lanka by six wickets at the Wankhede Stadium in Mumbai.

India were chasing a stiff target of 274, but captain Mahendra Singh Dhoni hit a scintillating 91 not out from 79 balls to lead India to victory. The knock included the famous winning six off Nuwan Kulasekara.

While Dhoni was the star of the show, Gautam Gambhir also made a critical contribution of 97 runs while Yuvraj Singh and Virat Kohli played impressive cameos. India lifted the World Cup for the first time since Kapil Dev’s team won the trophy in England in 1983.

Here’s how some prominent names in Indian cricket recalled the momentous occasion on Twitter: 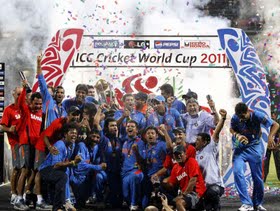 6 years ago #OnThisDay, Dhoni finished it off in style and we as a Team lived a dream & won the World Cup, the best memory for this generation

What a night it was at the Wankhede, Gautam Gambhir and MS Dhoni led india to an unforgettable victory and we won the World Cup at home.

It's been 6 years since we won the World Cup, the last moments of the game remain fresh in my memory. What a night that was👌

"2 April 2011 was a night like no other. Fans celebrating the World Cup win danced on top of @sachin_rt s BMW!! All was permitted!"

And here's the finishing stroke of the 2011 World Cup final. Unforgettable!

Like I always say, chase your dreams because dreams do come true, and this was one of those moments in my life when it happened.