The hollow feeling that exists in India’s impressive triumph

Okay, this is probably not the right time to say this. After all, India are on the verge of their first ever whitewash of Australia. But while India are euphoric over their wonderful triumph against Michael Clarke’s men, it still doesn’t make the present Indian squad a great one.

Okay, this is probably not the right time to say this. After all, India are on the verge of their first ever whitewash of Australia. But while India are euphoric over their wonderful triumph against Michael Clarke’s men, it still doesn’t make the present Indian squad a great one. They have played like champions at home (at least against Australia), but they will be tested for sure when they head abroad in the near future. The last time round, they headed to England and Australia with much hope only to comeback empty-handed.

It can definitely be argued that Australia have performed as poorly in India as the Indians did Down Under. But, it must be mentioned here that Australia have come here with arguably the weakest side ever. This wasn’t the case when India toured either England or Australia. They had all the big guns – Dravid, Tendulkar, Laxman, Gambhir and Sehwag (who was unfit during the England series but was still made to play). You cannot call that an under-talented side, can you? Of course, it is another matter altogether that most of these big names seemed well past their prime when they visited the two countries. 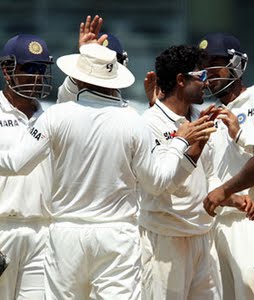 Great teams of the past have won against all opponents in all conditions – irrespective of where they were playing. A strong South African side upset India in India in 2000. Australia faltered at the final hurdle in 2001, but they came back strongly to conquer the final frontier in India three years later, that too against the same set of players to whom they had gone down during the memorable 2001 series. Even England beat India in India last year, in spite of the spinning pitches prepared at the behest of M S Dhoni. Last but not the least, current Test number one South Africa vindicated their ranking by defeating the Aussies in Australia. All this was possible in spite of the diverse conditions and not because of it.

Compare this with the scenario in India, and things are not as comprehensible. Over the last decade, they have only beaten England among the strong teams in alien conditions. They drew the series in England in 2002, before emerging victors in 2007. In Australia, they leveled the series in 2004, but lost in 2008. In South Africa, they were losers in 2006 in spite of winning the opening Test and drew the one in 2010. Their away victories have come against much weaker teams – New Zealand, West Indies and Bangladesh. The key aspect here is that, India tasted all these all these defeats while having their strongest side throughout.

For the moment, India can enjoy their winning run at home, they deserve to for they have experienced too many bad times for anybody’s liking. No credit must be taken away from Dhoni and his men for the fantastic showing they have put up against Michael Clarke’s men. At the same time, they should be aware at the back of their minds that they will be rated highly only if they triumph in adversely challenging conditions.