After claiming their third IPL title following​ the victory over Pune Supergiant, Mumbai Indians captain Rohit Sharma was effusive in his praise of the fast bowlers.

After claiming their third IPL title following​ the victory over Pune Supergiant, Mumbai Indians captain Rohit Sharma was effusive in his praise of the fast bowlers.

“There was assistance from the pitch, so it was a matter of exploiting the conditions. When three overs were left, I had confidence in the bowlers. They have always done the job wherever they’ve played. It was about giving freedom to them because they’re the masters and they’ve done it before. I just told them to do whatever they want and set the field accordingly,” Rohit said after the thrilling final. 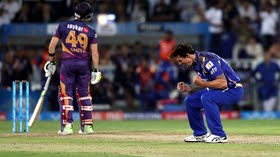 “I’m calm now. It was a great game of cricket. I’m sure the spectators enjoyed it. To be able to defend a score like this was a brilliant effort, I couldn’t ask for more. Whenever you’re defending a total like that, the first thing you’e to do is believe. I told the boys if we could do it against KKR (105) there was no way we couldn’t do it here,“ the captain further said.

Johnson, who took two wickets in the last over, chipped in by saying, “I wasn’t thinking much. I had a clear plan, to bowl at the stumps. Pressure situations are you are playing game for. I have done that before. It’s my second time.”