A spirited Afghanistan will take on a highly confident Australia in match number four of World Cup 2019 at Bristol. The last time the teams met in a World Cup, Australia posted 417, which remains the highest total in the competition. Afghanistan have serious scope for improvement thus.

Australia won both their warm-up matches, further proof that they are peaking at the right time. Afghanistan on the other hand stunned Pakistan in the first warm-up game but were undone by England in the second. They, however, gave enough hints again that they can create a few upsets.

The World Cup marks the grand return of David Warner and Steve Smith, both of whom have been in excellent form since making a comeback to the team. Even skipper Aaron Finch has hit form in 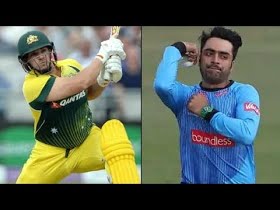 the nick of time while the rise of Usman Khawaja as a one-day batsman has made a significant impact on the team's fortunes.

Marcus Stoinis and Glenn Maxwell give further teeth to the Aussie line-up with their all-round skills. In the pace bowling department, Mitchell Starc and Pat Cummins would be the key even as Adam Zampa would be in charge of the spin department. How the absence of Josh Hazlewood impacts the team remains to be seen.

Afghanistan cannot be expected to create an upset against Australia but they will be pleased if they can run them close. Mohammad Shahzad and Hazratullah Zazai, their two dangerous openers are in form. In Rahmat Shah and Hashmatullah Shahidi they have two batsmen who can play around the attackers.

Spin is one area where Afghanistan could possibly trouble the Aussies a little. Rashid Khan would be keen to enhance his reputation even further while Mujeeb Ur Rahman and Mohammad Nabi can give him good support. In the pace department, Dawlat Zadran and Hamid Hassan are expected to play pivotal roles.