Ashish Nehra retired from international cricket after India's thumping win over New Zealand in the first ODI at Delhi.

Ashish Nehra retired from international cricket after India's thumping win over New Zealand in the first ODI at Delhi.

At the post-match conference, Nehra reflected on his career. “I always felt that no bigger thing than to retire at the venue you want to play your last at. It is definitely a lucky moment. I said at the previous press conference too that people may say you can play for six months or 12 months more but I felt it is better to retire when you’re at the top.

“It will be 19 years since I made my debut and now I’m retiring at the age of 38-39 years. It is emotional that I will be giving up what I’ve been doing for the past 20 years but there is life after this also. Even the people in the current dressing room know that there is life after cricket also,” he added.

On bowling the last over of the match, Nehra admitted, “It definitely was an emotional moment. Virat Kohli wanted me to bowl the final over after the 15-16th over. As a cricketer, you shouldn’t say this but by then the game was almost over. Of course miracles do happen but today it seemed like it wasn’t going to happen. 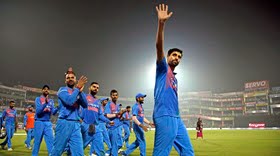 “So I prepared myself to bowl the final over and it was an emotional moment. I remember bowling my first over from that very end in 1997 against Haryana and Ajay Sharma was the captain standing at mid-off. Don’t know where those 20 years went. Sure there will be regrets but I consider myself to be a very lucky guy to have had a long career despite the number of injuries,” he added.