West Indies began their World Cup 2019 campaign on a winning note with a seven-wicket mauling of an out of sorts Pakistan, bowling them out for 105 at Trent Bridge.

Oshane Thomas was the star of the show for the Windies with excellent returns of 4 for 27. With the bat, Chris Gayle blazed his way to a 50 while Nicholas Pooran also hit a few meaty blows as the chasing side got home in emphatic fashion. 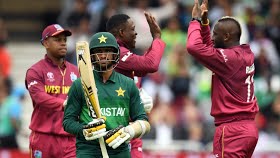 Following the crushing win, West Indies skipper Jason Holder stated that his team is here to win and they aim to go all the way. "We wanted to start with a win, so I'm very happy that we started the tournament with a win," Holder said in the post-match presentation.

"It's been a long build-up. We've been anxiously waiting for this first game. It's good to get it out of the way and to be on the better side today. As long as we stay fit, we've definitely come here to win this World Cup. But we've got to play the cricket to say that. We don't want to get too far ahead of ourselves," Holder added.

On man of the match Thomas, Holder said it was good to have the young quickie. "We know he can be a bit expensive at times, but he's a genuine wicket-taker - and that's a gamble we're willing to take now in the modern-day format.

"With such high totals in cricket, you need to get wickets. That's one area that we wanted to highlight and pinpoint. We see him as an impact player and he came in today and did an outstanding job for us," Holder added.

Apart from Thomas and Gayle, another impact player for West Indies, Andre Russell also stood up and delivered. He took 2 for 4 in three overs to further peg back Pakistan. "Russell is an impact player. You all can see what he can do with the ball and, as well, with the bat. It's really good to see him coming and making that impact he did today," Holder explained.

Despite the heavy loss, Pakistan skipper Sarfaraz Ahmed played it down as a bad day for his batsmen. The only bright spot for Pakistan was Mohammad Amir getting back among the wickets.