Ever since Sri Lanka went on to win the World Cup in 1996, they have been highly impressive at major ICC events, but victory at the big moment has somehow eluded them in recent years.

Ever since Sri Lanka went on to win the World Cup in 1996, they have been highly impressive at major ICC events, but victory at the big moment has somehow eluded them in recent years. They made it to the World Cup final again in 2007 and 2011, but were beaten comfortably. They also made it to the World T20 final once when they went down to Pakistan. Even the Champions Trophy victory back in 2002 was shared with India after rain played spoilsport. This must have been in Sri Lanka’s mind as they headed into the final edition of the Champions Trophy.

Having lost the first game to New Zealand in a close encounter, a defeat against England at the Kennington Oval on Thursday would have meant curtains for Sri Lanka as far as this tournament is concerned. And the fact that Lanka have been deprived of a major trophy in spite of the present of some stalwarts in the side over the last decade would have been playing on the minds of some seniors. This is something that must have inspired former skipper Kumar Sangakkara to play one of the best ODI knocks under pressure, chasing a big total. 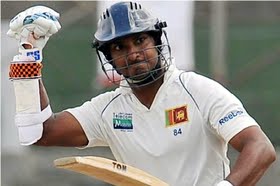 Lanka were definitely on the back foot after Ravi Bopara tore into the Lankan bowling at the death, giving England a significant advantage at the halfway stage. However, Sangakkara’s assured presence out in the middle kept Sri Lanka’s hopes alive right through, so much so that in the end the Lankans got home rather comfortably. The experience of Sangakkara under the tense situation came through as he kept caressing the ball and finding the boundaries at opportune moments. The fact that Sangakkara batted right till the end meant that the others could bat around him.

In fact, Lanka’s chased proved that even in the era of power plays, a match can be won playing in the traditional style. In typical 90’s type chase, Sangakkara anchored the innings to perfection. With the southpaw getting the big hundred, the smaller contributions from the rest proved fruitful in the bigger picture. To their credit, Tillakaratne Dilshan and Mahela Jayawardene hung around long enough for Sri Lanka to build two crucial partnerships. The decision to send Nuwan Kulasekara in was a rather surprising one, but the medium pacer made it work with some smart hitting, ensuring the desired run rate was maintained. Since it came off, it looked like a masterstroke.

There was nothing much the England bowlers could do on a day when Sangakkara blocked every hope of victory for them. Still, it must be stated that they could have been better when the pressure was on. Stuart Broad and Tim Bresnan went for plenty, and the part-time bowling of Joe Root was rather shabby. In fact, it was only James Anderson who made an impact. England were better with the bat; skipper Alastair Cook, Jonathan Trott and Root coming up with impressive half-centuries. But, everything paled in comparison to Sangakkara’s genius on the day.