India A continue domination against Bangladesh on Day 2

After conceding a huge lead of 183, Bangladesh found themselves in deep trouble early in the second innings as well, on day two of the three-day match against India A at the Chinnaswamy stadium in Bangalore

After conceding a huge lead of 183, Bangladesh found themselves in deep trouble early in the second innings as well, on day two of the three-day match against India A at the Chinnaswamy stadium in Bangalore. Ishwar Pandey sent back opener Anamul Haque for a duck, having him caught by Karun Nair. The other opener, Soumya Sarkar fell to Jayant Yadav for 14, also caught by Nair. Bangladesh finished the day at 36 for 2, trailing India A by 147 runs, with one full day to go.

Unperturbed by rain delays, India A build on their solid foundation, and made great use of the batting conditions and an insipid Bangladesh attack on day two of the day match. Resuming the innings on 161 for 1, after rain delayed the start of play, India A finished on 411 for 5, declaring with a lead of 183. It was a rather immaculate batting show from India A, in stark contrast to the one put up by the opposition a day earlier. 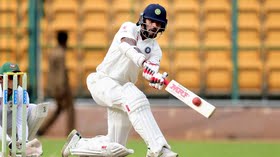 Shikhar Dhawan carried on from where he had left off the day before. He found good company in number three Shreyas Iyer, who also looked in good nick. Dhawan was eventually dismissed against the run of play, exactly for 150, trapped lbw by Saqlain Sajib. In a knock, which came off 146 balls, Dhawan hit 18 fours and 3 sixes, an excellent result just prior to the South Africa T20s. As often happens in cricket, one wicket is followed by another. In this case, Iyer was bowled by Nasir Hossain for 38.

At 232 for 3, Bangladesh would have sensed an opening of sorts, but it wasn't to be as the batsmen continued to dominate. Karun Nair and Vijay Shankar featured in an impressive fourth wicket partnership worth 108. Nair slammed 71 from 97 balls with the aid of 12 fours before being clean bowled by Nasir Hossain. Shankar was equally impressive making 86 from 110 with 4 fours and as many sixes. He was the fifth wicket to fall, bowled by Jubair Hossain, at which point Dhawan declared. Naman Ojha was unbeaten on 25 at the other end.