Having narrowly escaped an embarrassment against Bangladesh, New Zealand will seek to put up a more impressive performance

Having narrowly escaped an embarrassment against Bangladesh, New Zealand will seek to put up a more impressive performance when they face Afghanistan in match number 13 of World Cup 2019 at Taunton.

New Zealand's bowling has been their strength in the two games so far. Matt Henry almost single-handedly won the game for them against Sri Lanka while Trent Boult too has made his impression with the ball. Colin de Grandhomme's performance has been a bonus as he has got some big scalps. Mitchell Santner too has been impressive with his guile.

While New Zealand openers rollicked in their 10-wicket win over Sri Lanka, the batsmen found it tougher against Bangladesh. Ross Taylor and Kane Williamson starred with the bat in the previous game. However, they would want to avoid a batting collapse like the one against Bangladesh. The batsmen should find things easier against the Afghanistan attack. 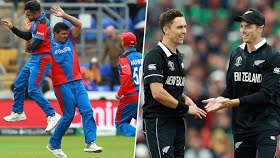 Speaking of the minnows, while there is no doubt about their resoluteness, they are not quite managing to put the finishing touches on performances. They have been dealt with a big blow with Mohammad Shahzad being ruled out of the remainder of the World Cup due to a knee injury. The batting hasn't quite come together apart from Najibullah Zadran. As a result they lost a big opportunity against Sri Lanka to register a historic win.

Afghanistan would be extremely pleased with their bowling effort against Sri Lanka. After a poor start, Mohammad Nabi came in and ran through the Lankan batting line-up with his canny off-spin. There are lots of hopes from the young Rashid Khan as well. He hasn't quite come into his own in the tournament so far. However, he is definitely seen as someone with a big match temperament.