Pietersen has pulled out of IPL 2017. Guess Why!

Former England skipper Kevin Pietersen won't be part of this year's IPL. KP, as he is fondly called, stated that he has very busy winter season, and isn't putting his name up for the player auction

Former England skipper Kevin Pietersen won't be part of this year's IPL. KP, as he is fondly called, stated that he has very busy winter season, and isn't putting his name up for the player auction, which will be held later this month.

"I won't be going into the IPL auction. My winter has been too busy with all my travel & I don't want to spend April/May away too," Pietersen posted on Twitter.

Pietersen has indeed has a busy schedule. He featured in the domestic T20 tournament in South Africa, scoring 198 runs in five innings for Dolphins. He then turned up in the Big Bash League in Australia. Here, he scored 268 runs in eight innings for Melbourne Stars, which made it to the semi-final. 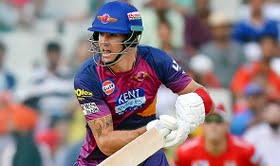 Pietersen was even part of Quetta Gladiators during the inaugural season of PSL in 2016 and will be part of the team this year as well. The tournament will be held from February 9 to March 5. The IPL, on the other hand, starts in the first week of April and ends in the third week of May.

The 36-year-old turned out for Rising Pune Supergiants last year. However, he did not have much role to play. He featured in only four matches, and then was ruled out owing to a calf injury. He was then released by the franchise last December. He would have had to take part in this year's auction, and needed to find a team.