So, England aren’t invincible after all. They may have retained the Ashes following the rain-marred draw at Old Trafford in Manchester, but it wasn’t a convincing one by any stretch of the imagination.

So, England aren’t invincible after all. They may have retained the Ashes following the rain-marred draw at Old Trafford in Manchester, but it wasn’t a convincing one by any stretch of the imagination. In fact, it would only be fair to say that had rain not intervened, England might well have gone on to lose the third Test. Australia proved that if put under pressure, even the present English side in vulnerable. Right from the start of the Manchester Test, England were put on the back foot, and did not have the firepower to thwart the Aussie fight back.

The Ashes may be in England’s bag, but there is still a series to be won as far as the hosts are concerned. And, in that sense, they still have to work on a number of aspects as they head into the fourth Test at Chester-Le-Street, which begins in couple of days’ time. In spite of the disappointment of not being able to push for a win at Old Trafford, the momentum will definitely will be with Australia as the teams face off for the fourth time in the series. The challenge for England can now be expected to be a lot sterner provided Australia continue with their improved showing.

Now that some of the chinks in their armour have been exposed, they will have to look at themselves closely in the mirror to figure out the departments in which they need to show steady improvements. First and foremost, they can do with bigger scores from their skipper at the top. Alastair Cook has registered a couple of half-centuries, but a top score of 62 after six innings does not do justice to a batsman of Cook’s calibre. The captain would thus be keen to set things right very soon. 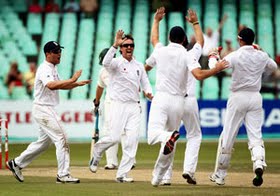 The top order in fact has been a cause of worry for England. Joe Root got the one big hundred, but hasn’t featured in any big partnership with Cook. Further, Jonathan Trott has only one half century to his name, but even more concerning has been the fact that he has looked woefully out of touch. In the third Test, in particular, Trott struggled to get into any kind of rhythm. He is a high-quality player, which means Trott can be expected to return to form at any point, but for England the sooner the better.

Kevin Pietersen has got an excellent hundred and a fifty, but he has been inconsistent in between. So, basically, it has been Ian Bell who has held the England batting together by coming up with significant knocks in each and every Test, including two tons. Even the English bowling, which had looked extremely dangerous at Trent Bridge and Lord’s, was below par at Manchester once the Australian batsmen got their act right. James Anderson, of all people, seemed pedestrian. The impressive performance by Australia in the third Test was perhaps an indication that Australia rated England a bit too highly and paid the price.