South Africa batted brilliantly on the penultimate day of The Oval Test to tighten their grip on the game, and go a long way in putting England under serious pressure.

South Africa batted brilliantly on the penultimate day of The Oval Test to tighten their grip on the game, and go a long way in putting England under serious pressure. Not only did Hashim Amla and Jacques Kallis bat exceedingly, well they also ensured that he grinded the England bowlers into submission, as a result of which they appeared totally flat after a while in spite of having a highly-rated bowling attack. Remember, England are the number one Test in the world presently. However, the way South Africa batted on day four, it appeared they were flaying the Bangladesh attack. Amla and Kallis took the score from an anyways impressive 260 for 2 to 637 whilst keeping their wickets in tact. 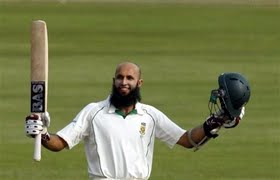 The declaration meant that South Africa got a massive 252 run lead. However, more that the number of runs, it could be the psychological impact of having to spend nearly two days out in the field with little success that could have an adverse impact on their batting not only in this game, but in the Tests to come as well. When in an attack comprising James Anderson, Stuart Broad, Tim Bresnan and Graeme Swann, each of them goes for over 100 runs, with only a couple of wickets to show between them, it is a clear indication of how they have struggled. The negative impact of the long, unfruitful time they spent in the field was evident when an inspired Proteas attack rocked England early in the second innings. In the previous games they played at home, England’s top and middle order had a rather comfortable time, and a lot of it had to do with how brilliantly their bowlers have performed. In this game, however, the case has been totally different, and the English top and middle order will be tested for sure.

With such a massive lead and with the visitors having no chance to pull off a win, all hints point towards a South African win. Rain could possibly prevent England from going 1-0 down in the series. Additionally, they would be hoping for some impressive performances from their middle and lower order on the last day. The contribution of the lower-order batsmen would be particularly crucial. After all, a couple of times in the recent past, it was number eleven Graham Onions who prevented England from succumbing to defeat in a couple of close games.

England are on the back foot no doubt, but if the batsmen can dig themselves in on the last day, they might just be able to pull off another tantalizing draw.