Ishant Sharma produced a career best of 7 for 74 as England collapsed in a heap in the afternoon session for a 95-run defeat.

Ishant Sharma produced a career best of 7 for 74 as England collapsed in a heap in the afternoon session for a 95-run defeat. This was only the second Test win for India at Lord’s and it came after a gap of 28 years! MS Dhoni’s master plan of asking Ishant Sharma to persist with the short stuff paid off as the English batsmen fell in the trap completely.

Soon after lunch, the pair of Root and Prior seemed to be running away with the match as they scored 20 runs in the first couple of overs against short bowling from Ishant and Shami. The plan of sticking with the short balls all the time looked ridiculous but it consumed the wicket of Matt Prior (12) whose full blooded pull shot went in the air and straight to deep mid wicket. The next batsman Ben Stokes too went for the pull, and that too without opening his account to top edge it from outside off and hole out to mid wicket. 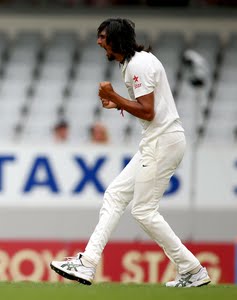 Ishant’s with three strikes in succession left England reeling at 201 for 7. The second new ball wasn’t taken by India at all. Very soon Joe Root departed to the short ball from Ishant as he by mistake pulled it in the air to get caught at deep backward squareleg. Root scored 66 having faced 146 balls while hitting 4 fours.

Ishant bagged his sixth wicket when Broad was caught down the legside fending off a short ball. Last man James Anderson was run out by Jadeja’s direct throw off his own bowling. England were bundled out for 223 with six wickets falling for 50 runs in 12.2 overs! Ishant Sharma was the Man of the Match.

Update at Lunch on Day 5: A last ball wicket in the session lifted the spirits of India while denting England’s chances of a victory. The visitors still hold the advantage with England five down. It was otherwise a solid session for England with Joe Root and Moeen Ali putting on a century stand.

Moeen Ali fell in the last ball before lunch, closing his eyes to a well directed bouncer from Ishant Sharma which hit the back of his bat and lobbed up to shortleg. Moeen Ali who faced 147 balls scored 39. His overnight partner Joe Root batted superbly to score his 5th Test fifty. At lunch, Root is on 52 (from 126 balls) with England needing 146 more runs to win.