First, fix your own country, then speak about others: Shikhar Dhawan slams Pak cricketers

India’s limited-overs opener Shikhar Dhawan has hit out at Pakistan cricketers for speaking out about the situation in India and has advised them to look at their country first. He also stated that tweeting against Pakistani cricketers has become his latest hobby.

It may be recalled that, in 2018, former Pakistan cricketer Shahid Afridi had hit out at India over the situation in Kashmir. “Appalling and worrisome situation ongoing in the Indian Occupied Kashmir. Innocents being shot down by oppressive regime to clamp voice of self-determination & independence. Wonder where is the @UN & other int bodies & why aren’t they making efforts to stop this bloodshed?” Afridi had written on this Twitter account.

To this, Dhawan responded in Hindi and asked Afridi to look at the situation in his country first and try to improve the same. He also told Afridi that his advice on India’s internal matters was not needed.

Visiting the show ‘Aap Ki Adalat’ as a guest, Dhawan was asked about the same and stuck to his stand that Pakistan cricketers would do better to look at how things are in their own country.

“If someone says something about our country, of course, we will say stand up. We don’t need outsiders to advise us. First, fix your own country and then speak about others. There is a saying ‘Jinke ghar kanch ka hoh, woh dusro k ghar pathar nahi phekte (People who live in glass houses, should not throw stones at others’house)’,” Dhawan went on to add during the talk show.

Dhawan also spoke about the retirement debate surrounding Mahendra Singh Dhoni and opined that people should leave him alone and let him make the call. The left-hander, who made his debut under Dhoni, praised the former skipper’s player management skills. 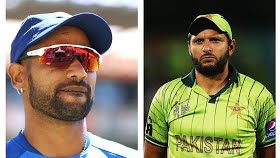 "Dhoni has been playing for so long, I feel he understands when he should retire. This should be his decision. He has taken very important decisions so far for India in his career and I'm sure he will make the call when the time comes," Dhawan further said on Rajat Sharma’s talk show.

In the same show, Dhawan also spoke about the role Dhoni played in the grooming of current skipper Virat Kohli.

"When Virat was young, he guided him immensely. Even when he became the captain, Dhoni Bhai was always there to help him. This is the quality of a leader. It's good to see that Virat is showing his gratitude to him now," he added.