Apart from the morning session, nothing went right for Team India. New Zealand are sitting pretty by the close of Day 1 at 329 for 4 in 90 overs.

Update at Stumps on Day 1: Apart from the morning session, nothing went right for Team India. New Zealand are sitting pretty by the close of Day 1 at 329 for 4 in 90 overs. The Indian bowlers not only failed to wrap up the Kiwi innings quickly on a green track under cloudy conditions but also struggled to contain the scoring rate.

There was just the one success in the final session that too off an innocuous delivery from Zaheer Khan. A well set Kane Williamson was caught down the legside by Dhoni to the wayward delivery from the veteran pacer. Williamson got out for 113 (from 172 balls with 10 fours and 2 sixes), which is his 5th Test century. His partnership with McCullum for the 4th wicket was 221 runs in just 51 overs.

Brendon McCullum is still unconquered on 143 which has come in just 210 balls with 18 fours and 2 sixes. Anderson has helped himself to 42* from 78 balls with 5 fours and a six. 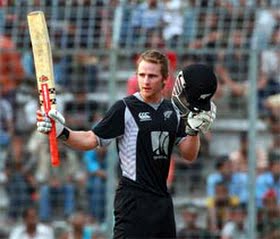 Update of Afternoon Session: A strong partnership between Kane Williamson and Brendon McCullum rescued hosts New Zealand by Tea time to 179 for 3 in 51 overs. Williamson, who scored consistently in the ODI Series moved to 79 not out while Brendon McCullum has got to 71*.

India missed out in sustaining the pressure on the Kiwis with Murali Vijay putting down a sitter early in the afternoon session to grant a life to Williamson. The unlucky bowler was Mohammed Shami. India struggled to make any further inroads after that.

Update of Morning Session: Under gloomy conditions, Indian seamers were on top tying down the Kiwis to 54 for 3 in 24 overs. Surprisingly, the best bowler for the visitors was unexpectedly Ishant Sharma, who took two of the three wickets to go down.

Hamish Rutherfold was the first to depart for 6, in the 10th over, pushing well away from his body on the backfoot to edge Ishant Sharma to the diving Rahane at gully. Less than three overs after, Zaheer Khan struck at the other end trapping Peter Fulton lbw for 13. Very soon, Ishant delivered his second blow when Ross Taylor drove him carelessly on the up to spoon a catch to short mid off leaving the Kiwis struggling at 30 for 3.

By lunchtime, the Kiwis have got Kane Williamson alongside Skipper Brendon McCullum with plenty of repair work to do.

Toss and Teams: MS Dhoni has gone onto win the toss for a sixth time in a row on this tour. The Indian Captain has invited the Kiwis to bat first under overcast conditions at the Eden Park in Auckland.

Conditions are likely to be tough for the batsmen on a grassy looking pitch. India has gone in with the same team that played against South Africa in its last Test which includes Ishant Sharma! The Kiwis have three specialist pacers along with leggie Ish Sodhi.