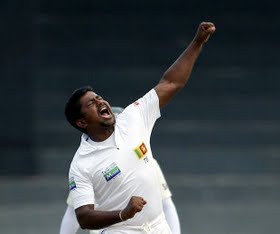 Sangakkara is the Man of Series for his 441 runs.

Rangana Herath became the third Sri Lankan bowler to reach the 200-wicket mark. In 47 Tests, Herath has picked up 200 wickets at an average of 29.52 with 16 five-fors.

Sri Lanka's win is their 13th in 14 matches against Bangladesh. Since 2001, the highest number of matches Sri Lanka have won against any other team is six (West Indies).

Kumar Sangakkara's tally of 441 runs in the series is the fifth-highest overall and the second-highest by a Sri Lankan batsman after Mahela Jayawardene's 474 runs against England in 2007 (max four innings).

Rangana Herath gets his 200th wicket in his 47th Test. Level with Kumble, Holding, Trueman and Kaneria. Rangana Herath became only the third Sri Lankan to take 200 Test wickets

This is Rangana Herath' 15th 5wkt haul in Tests, his first v Bangladesh. He has five-for against all Team he has played except WI.

Sangakkara's aggregate of 10486 runs is the highest for any batsman after 200 Test innings. Brian Lara had got 10470 runs.