Just a couple of days after Virat Kohli, the Indian captain, rubbished all allegations of a rift with his deputy Rohit Sharma, now the latter has taken to social media

Just a couple of days after Virat Kohli, the Indian captain, rubbished all allegations of a rift with his deputy Rohit Sharma, now the latter has taken to social media, and put up a post expressing what playing for the country means to him.

Taking to Instagram, Rohit posted a photo of him walking out to bat, and with it wrote, "I don't just walk out for my Team. I walk out to my country." The Indian vice-captain had a spectacular World Cup 2019 with a record five hundred, three of them in a row. However, he failed in the semi-finals, managing just one.

Ever since India's World Cup exit, numerous reports have been floating around about Kohli and Rohit not being on good terms with each other. The Indian captain, however, put an end to the speculation in the build-up to the West Indies tour terming all reports baseless and cooked up. 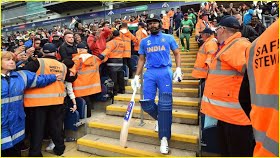 "In my opinion, it's baffling, to be honest. It's absolutely ridiculous to read such stuff that comes out. I have been to a few public events and the public sentiment is 'AAP log kya khele. We have so much respect.

"We are feeding off lies. We are overlooking facts. We are turning a blind eye to all the good things that have happened. We are creating fantasies and scenarios in our head and want to accept that this is the truth.

"I have seen this for too long now. Bringing personal lives into the picture. It's disrespectful after a moment. We've had no issues. If I don't like somebody, it shows on my face. I have also heard a lot in past few days but if the team atmosphere isn't good, we couldn't have played well," Kohli said about the controversy.

On the other hand, coach Ravi Shastri added. "The way the team plays, no individual is bigger than the team. The way they play is in the interest of the game. You cannot have that consistency if there is a rift or whatever."