Sri Lanka helped itself to a commanding total of 361 for 3 in a slightly curtailed opening day’s play at Galle in their First Test against minnows Bangladesh. Against an ordinary Bangladeshi bowling and fielding

Sri Lanka helped itself to a commanding total of 361 for 3 in a slightly curtailed opening day’s play at Galle in their First Test against minnows Bangladesh. Against an ordinary Bangladeshi bowling and fielding, the Sri Lankan batsmen made merry, in particular Kumar Sangakkara, who on a comeback after a finger injury, scored 142. It was Sangakkara’s 31st Test century and his 142 came in 226 balls with 16 fours and 3 sixes. 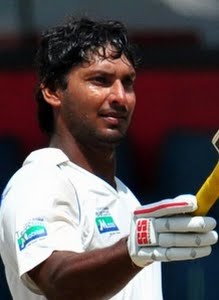 The hosts had a wonderful opening start with 114 runs on the board in just 23 overs with Tillakaratne Dilshan scoring 54 from 63 balls (with 9 fours). Dilshan was caught at mid off in an attempted big shot in Sohag Gazi’s bowling. Sri Lanka’s other opener Dimuth Karunaratne had retired hurt after being hit on the elbow in a pull shot but resumed his innings at the fall of Dilshan’s wicket. The left-handed opener scored 41 before he was trapped lbw by an arm ball from off-spinner Sohag Gazi.

The only other wicket to fall in the day’s play was that of Kumar Sangakkara who was caught at covers trying to smack Sohag Gazi for a boundary. By the close of play which came a touch early in the 86th over because of rain, Sri Lanka had Lahiru Thirimanne bating on 74* (from 127 balls with 8 fours) along with Skipper Angelo Mathews (25*).

Toss and Teams: Sri Lanka have won the toss and elected to bat first in the 1st Test at Galle. Angelo Mathews will be leading Sri Lanka for the first time in Test Cricket and his team has some new names – one of them is Kithuruwan Vithanage who will be making his Debut. For Bangladesh, Tamim Iqbal misses out with a wrist injury. Bangladesh are fielding a couple of very young debutants in Anamul Haque and Mominul Haque.

The Galle pitch is likely to have spongy bounce and the ball is not expected to come onto the bat. The ball is likely to move around the seam because of the grass on the surface and it could take turn in the latter half of the Test match.