Team India eased to a 7-wicket win at the Harare Sports Club to seal their ODI Series against Zimbabwe 3-0. It was the bowlers who set up the game for India having bowled out the hosts for 183.

Team India eased to a 7-wicket win at the Harare Sports Club to seal their ODI Series against Zimbabwe 3-0. It was the bowlers who set up the game for India having bowled out the hosts for 183. Skipper Virat Kohli took India home after that with a good knock of 68 not out. The series now moves to Bulawayo with two more ODIs to be played.

Zimbabwe asked to bat first were in early soup losing its in-form opening batsmen by the 2nd over of the match. Vusi Sibanda was the first to go for a duck in the third ball of the match, after giving the charge to Vinay Kumar and miscuing a slog off a short ball to covers. Sikandar Raza tamely edged an away going delivery from Shami to the keeper. After those two early wickets, India had to work hard to get the third with the pair of Masakadza and Taylor adding 65 runs. Brendan Taylor (23 from 44 balls) departed in the 16th over, driving uppishly off Unadkat and getting caught by a forward diving Shami. 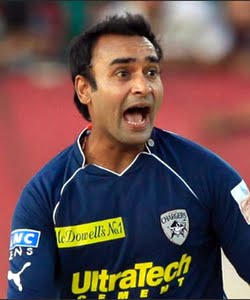 Amit Mishra completely changed the match in his first over by taking the wickets of Hamilton Masakadza and Malcolm Waller in consecutive balls. While Masakadza (38 from 53 balls with 5 fours) was caught behind cutting a jumping leg break to the keeper, next man Waller was foxed by a googly which had him lbw. Mishra may have missed out an international hat-trick but his blows left the hosts at 80 for 5 in the 20th over.

Elton Chigumbura, who has played a couple of good knocks in this series, failed today and got out for just 3, lbw to an arm ball from Jadeja. Zimbabwe from 89 for 6 slipped further to 133 for 8 by the 35th over. Prosper Utseya, who scored a fifty in the last game, was forced to edge an away swinger from Shami Ahmed. Sean Williams was looked real good and scored 45 from 53 balls (with 2 fours and a six). The left-hander was run out trying to take a risky second run from Jadeja.

Amit Mishra took the remaining two wickets and the Zimbabwean innings ended in 46 overs with the tail wagging a bit. The run chase was pretty easy for India with the wicket only flattening out in the afternoon. Rohit Sharma became the first casualty edging an away swinger from debutant Michael Chinouya to the keeper in the 6th over.

Shikhar Dhawan threatened to tear the bowling attack but got out after a 32-ball 35 when he drove Tendai Chatara uppishly to cover point. India had to play carefully with the score at 67 for 2 in the 15th over when Kohli and Rayudu got together. The pair sealed the run chase with a steady 64-run stand. AT Rayudu got out tamely dragging an early drive to the bowler Brian Vitori, after working hard for a 54-ball 33.

Skipper Kohli finished the match in an entertaining fashion scoring his 68* from 88 balls with 5 fours and a six. Suresh Raina helped himself to a busy 28* (from 18 balls) as well. Leggie Amit Mishra got the Man of the Match award for his 10-0-47-4 figures.

Toss and Teams: An unchanged Team India has won the toss and asked Zimbabwe to bat first in the Third ODI at Harare. Zimbabwe has made one change with debutant Michael Chinouya replacing Kyle Jarvis. The pitch for this game is a used one and is pretty dry to assist the spinners. The early morning start will aid the seamers for an hour or so.