Clouds of uncertainty continuous to hover over medium-pacer Munaf Patel availability for the first Test against West Indies at Sabina Park starting next week.

Clouds of uncertainty continuous to hover over medium-pacer Munaf Patel availability for the first Test against West Indies at Sabina Park starting next week. 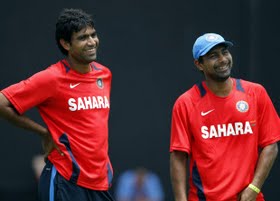 The gangling medium-fast bowler from Gujarat was reduced to a spectator as his team-mates, including Test arrivals from home notably Rahul Dravid, VVS Laxman and Mahendra Singh Dhoni, put themselves to a vigorous work-out Friday.

Coach Duncan Fletcher has refused to shed light on the reason for Patel's inactivity in the last two team sessions, as well as on missing out on the final one-day international here on Thursday.

The only word the Zimbabwe-born coach has said is that "Patel should be fit for selection for the Test."

Patel was hugely impressive in India's World Cup campaign as well as in the one-day series here where he picked up eight wickets from three matches at 17.75 average.

However, he has not played a Test for India for over two years now and if the trend continues it would most likely pave the way for Praveen Kumar's inclusion in the Test team.

In the practice session, coach Fletcher appeared keen to pick up the brains of Dravid and Dhoni.

Fletcher had said earlier that he was looking forward to learning from men with such wealth of experience.

Dhoni was among the early bats to pad up but then sat in the shade for long while others took their turn under a scorching sun.