Bangladesh will face India in the second semi-final of the Champions Trophy on Thursday. 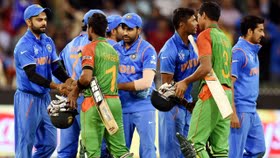 He is well aware of the hype around Bangladesh going thus far in the tournament. On the occasion, he says. "It's not a very big game but a very big opportunity. If we take it like that, it would be good for us. Any cricketer thrives on these opportunities. That's why sportsmen love these games. That's my message to all cricketers - junior or senior. Grab this opportunity with both hands."

On whether Bangladesh will be seeking revenge of sorts for the 2015 World Cup, he adds, "There's no feeling of revenge. It's about playing a good game against a very good Indian team. A win would give us a lot of confidence. We are thinking about winning and giving our best."

He said that Bangladesh have chalked elaborate plans for all the Indian batsmen. "Not many people gave us chance to reach even this far. But India is a good team, if we can beat them, it will be a very good achievement for us,” he concluded.