England have been delivered with a severe blow ahead of their first Jazz Cup Test Match against Pakistan with the news of all-rounder Tim Bresnan flying back home. Tim Bresnan has been ruled out of the 3-Test Series with an elbow injury in his right hand. The 26-year-old Bresnan is considered to be a lucky charm for England with the side winning all the 10 Tests that he has played in his career so far.

Bresnan’s place in the squad has been taken by seam bowler Graham Onions who is already with the team as a reserve player. England will miss the all-round abilities of Bresnan though whose place in the XI is likely to go to tall fast bowler Steven Finn. 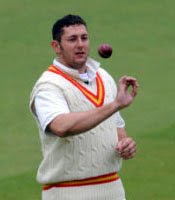 On twitter, Tim Bresnan has reacted to his injury saying : “Gutted to be going home.thanks to KP for picking up the roulette tab. 13 of us. Ooofff”.