Australia regained the world champions crown they had lost in 2011 by easily defeating New Zealand in the finals at Melbourne. Australia only lost one match in the entire tournament, that too to the eventual runners up. Here's a detailed look at how the players performed in the series.

Australia regained the world champions crown they had lost in 2011 by easily defeating New Zealand in the finals at Melbourne. Australia only lost one match in the entire tournament, that too to the eventual runners up. Here's a detailed look at how the players performed in the series. 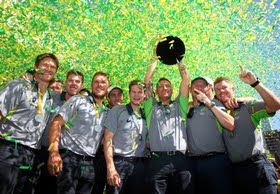 David Warner (3/10): The Aussie opener had a disappointing World Cup campaign. He got a big hundred against one of the minnows, but otherwise did not do much. In the low chase in the final, he made a crucial 45. Warner finished the World Cup with 349 runs.

Aaron Finch (4/10): He began the World Cup with a wonderful hundred against England, but failed in most of the subsequent matches. In spite of being out of form, he managed 81 against India in the semis. In the final however, he went for a duck, ending the World Cup with 280 runs.

Steven Smith (9/10): Yet again Australia's star performer, he was consistency personified, and finished with 402 runs in the World Cup. Although he had some low scores at the start, he stood up when it mattered most, with half-centuries in the quarters and the finals, and a hundred in the semis.

Michael Clarke (5/10): The Aussie skipper battled injuries in the early part of the tournament. When he returned, he seemed out of form, and was troubled by the short ball. But a day after announcing his retirement, he made a fluent 74 in the final. Clarke managed 219 runs in the series.

Shane Watson (6/10): After struggling early on, he was dropped from the eleven. But, he came back hard with fighting half-centuries against Sri Lanka and Pakistan, the latter in the quarter finals. He was at the crease when the winning runs were hit in the final. With the ball, he claimed two wickets.

Glenn Maxwell (6/10) The Aussie middle-order bat will be remembered for his brutal assault on the Lankan bowling during his blistering hundred. He did not have to do much in other games, but played nice cameos. He finished with 324 runs. Maxwell also chipped in with the ball, claiming 6 wickets.

Brad Haddin (4/10): He wasn't needed much with the bat, but swung the willow reasonably well on a couple of occasions, making 126 runs. Behind the wickets, he was brilliant, pulling off some age-defying catches.

James Faulkner (7/10): He was the star of the final with three big wickets. Faulkner was also among the wickets in the semi-finals. He ended the tournament with 10 wickets, a part of which he had missed due to injury. He was hardly needed with the bat.

Mitchell Starc (10/10): He finished as the tournament's joint leading wicket-taker with 22 scalps, and was the man of the series. Starc delivered the killer blow in the final when he cleaned up Brendon McCullum in the very first over. It was a flawless performance by Starc.

Mitchell Johnson (7/10): He was a bit up and down early on, but he delivered crucial blows in the semis and the final. Against India, he shone with the bat as well. Johnson finished the series with 15 wickets.

Josh Hazelwood (6/10): He was preferred over Pat Cummins for the later half of the tournament, and impressed claiming seven wickets, including four in the quarter finals.

Pat Cummins (3/10): The fast bowler claimed five wickets, but was expensive, and was thus replaced by Hazelwood.

Mitchell Marsh (2/10): He couldn't impress with his all-round skills, scoring only 31 runs and picking up five wickets.