Australia lifted their game on the big day and India crumbled under pressure and the hosts outbattled and outbowled India to win their fifth T20 World Cup title by a comprehensive margin of 85 runs.

Openers Alyssa Healy and Beth Mooney set the tone of the match with a splendid 115-run opening stand as the Aussies posted 184 for 4 batting first, despite a late fightback by India’s bowlers. In response, India was never in the game as they crumbled to 30 for 4, and could never recover from the significant blows. 99 was all they managed in the end.

Healy began the final by charging down the track and smashing Deepti Sharma for four over mid-wicket. The next ball was steered for another boundary between the backward point and the third man. India made matters worse for themselves as Shafali Verma spilled a catch in the covers off the fifth ball of the match. The drop was to prove very costly.

Healy went on to complete her half-century off only 30 balls as the hundred of the opening stand came up in style with Healy smashing Shikha Pandey over long-on for six. The next two deliveries were also hit for maximums as Healy completed a hat-trick of sixes. She was finally dismissed for 75 from 37, but her innings had done the damage. 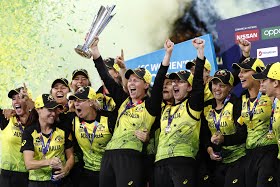 Healy’s partner Mooney ended unbeaten on 78 to ensure Australia crossed the 180 marks. She reached her half-century off 41 balls. The Aussies looked set to cross 200 at one stage. However, Deepti Sharma came back strongly to dismiss Aussie skipper Meg Lanning and Ashleigh Gardner while Poonam Yadav accounted for Rachael Haynes. In the end, though, 185 too was way beyond India’s reach.

The only way India could have stayed in the contest was if they got off to a strong start. Instead, Verma was caught behind for 2 of 3, trying to guide a length ball. Smriti Mandhana, Jemimah Rodrigues and skipper Harmanpreet Kaur could not rise to the occasion while Tania Bhatiya was hit on the face and had to be replaced by Richa Ghosh as a concussion substitute.

Jess Jonassen had Rodrigues caught at mid-on for a duck and then dismissed the Indian skipper for 4 as Kaur tried to hit out. In between, Mandhana fell to Sophie Molineux as India disappointed a crowd of nearly 86,000 who turned up for a close contest at the MCG.

Despite the no-show in the final, Indian captain Kaur backed her young team and said her faith in the team is intact. "The way we played in the league stages, it was outstanding. It was unfortunate to drop those catches today. I still have a lot of faith in my team. Upcoming one and a half years are important. The future is important for us. We need to stay calm and focus on the areas we need to improve, especially the fielding. We know we weren't able to win the game because of our fielding. We need to keep these things in mind. The future is great for us. We need to trust ourselves. I trust this team."

India crumbled under pressure in the 50-over World Cup final in 2017 against England, and again on Sunday against Australia. Kaur admitted that India is failing to give its best in significant games. “We just need to think of how we are going to play with more focus on big games because sometimes, we are not able to give our best in important games. I hope the upcoming years will give us a lot of glories. This year we are hoping for some more games in the Women's T20 Challenge. That tournament is very important for our domestic cricket and we got two players from there,” the Indian captain added.