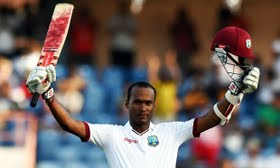 West Indies utilized the batting paradise condition as it didn’t offer anything to the bowlers. Brathwaite(101*) completed his century in the penultimate over of the Day 4 with the help of 11 boundaries, most of them where in the area between point and third man. He looked calm and composed and never tried to over hit the ball, just looked to play the ball on its merit. Brathwaite seemed to be a natural test player who enjoys his stay at the crease.

West Indies lost a early wicket of Devon Smith(2) just before the lunch which gave England the hope that they can get rid of Caribbean batting line very cheaply. But that didn’t happen as Brathwaite and Darren Bravo(69) added 142 runs together. Bravo was in good touch and looking set for a big inning but he poked a ball outside the off stumps to Butler. Marlon Samuels(22) along with Brathwaite negotiated the remaining day of play.

The stay at the crease for these two was not that easy as Jordon and Anderson targeted their stumps continuously and with the old ball getting the reverse swing, it caused all sorts of problem for the West Indian pair. But they managed to survive that moment somehow. Nevertheless, it was hard fought day for the English bowlers as they kept doing the hard work with much reward.

Earlier in the morning, England started the day 4 at 373-6 and played some aggressive shots to get as many runs at possible. Joe Root was looking set for his maiden test double ton but he was running out of partner. Root didn’t get any substantial support from other end and it was only his show for English team. Root(182*) missed out on double century as his last partner James Anderson got run-out in very ugly fashion. His quick fire inning contained 17 fours and four sixes.

West Indies affected three run-outs in England’s first inning, this is only the third time in 138 years history of England cricket that they have lost as many wicket as run-out.

England would put their all effort when the new ball will be due after five overs on day 5. They would try to get early wicket and use the new ball to good effect. On the other hand, Brathwaite and Samuels would begin the day 5 from where they had left on day 4 to make sure that they not lose too many wicket early in the morning.