England fightback to restrict SA to 262/5 despite Petersen ton

South Africa were restricted to 262 for 5 by the close of play on Day 1 thanks to a sustained quality seam and swing bowling from England.

Update at Stumps on Day 1: South Africa were restricted to 262 for 5 by the close of play on Day 1 thanks to a sustained quality seam and swing bowling from England. Despite a big rain break prior to the start of the final session, there was enough cricket to see 87 overs on an absorbing first day’s play at Headingley. Opener Alviro Petersen batted out all the three session to survive with an unbeaten 108. Petersen lost two partners in the final session – AB de Villiers (47) and night watchman Dale Steyn (0) to the second new ball.

England got the key wicket of AB de Villiers (47 from 107 balls with 9 fours) with the second new ball when the dashing batsman chopped a Stuart Broad delivery onto his stumps after an indecision whether to play or leave. AB de Villiers had put up 87 runs for the 4th wicket with Petersen. By the close of play, night watchman Dale Steyn (0) was also sent back to the pavilion after he was cleaned up by a pacy length ball from Steven Finn.

Update at Tea on Day 1: South Africa are on the backfoot at 163 for 3 in 52 overs after Tea was taken slightly early because of rain and bad light at Headingley. The pitch provided quite a lot of life for the English seamers because of the overcast conditions. 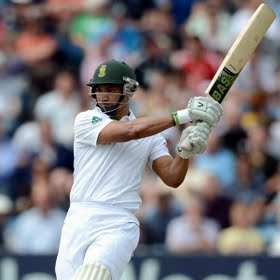 England’s first breakthrough came when Skipper Graeme Smith (52 from 93 balls with 4 fours) getting caught at backward squareleg flicking Tim Bresnan in the 38th over to end the 120-run opening stand. Just a few overs later, England were lucky when the prolific scoring Hashim Amla (9) was run out while reluctantly attempting a third run off an Alviro Petersen cover drive.

After a tough battle against the seaming ball, Jacques Kallis (19) fell in the 50th over edging his square cut off a wide delivery from James Anderson to second slip leaving SA at 157 for 3. Tea was taken after the 52nd over with Alviro Petersen (76* from 165 balls with 8 fours) joined by AB de Villiers (4*).

Update at Lunch on Day 1: South Africa had a wonderful opening session at Leeds on Day 1 with a solid score of 84 for no loss in 27 overs after winning the toss and electing to bat first in the Second Test. Alviro Petersen, who had a poor First Test at The Oval, took most of the strike facing 106 balls to score an unbeaten 59 (with 7 fours). Skipper Graeme Smith, who hardly got the strike in the initial overs helped himself to 24* (from 56 balls).

There was plenty of luck with the Proteas with Alviro Petersen getting dropped by Alastair Cook in the slips off James Anderson. Graeme Smith was even more luckier than his partner as he edged Steven Finn on the backfoot to first slip. However, Umpire Steve Davis had signaled dead ball just on time after noticing that Steven Finn’s leg had disturbed the stumps and that was a reason to distract Smith, the Striker.