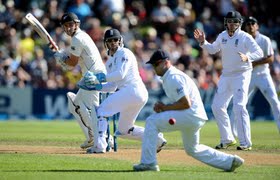 10th Test duck for Kevin Pietersen at Dunedin. His 5th "first ball" duck in Tests (twice vs Pak, once each vs Aus/WI/NZ).

Day 1 Play washes out without a ball bowled in Dunedin as heavy rain swept across the ground shortly after New Zealand had won the toss and put England into bat.

New Zealand captain Brendon McCullum had won the toss and asked England to bat in overcast conditions and gloomy light but umpires Asad Rauf and Paul Reiffel took a reading before play was due to start at 10:30 AM and delayed the start.

The last occasion the opening day of a Test match washed off in New Zealand: 18-3-2005 vs Aus at Wellington (Match drawn).

Graeme Swann has been ruled out of the entire series with New Zealand and will undergo surgery on his troublesome elbow.