The Amit Mishra led Haryana team has stormed into the Ranji Semi-Finals by pulling off a shock win over hosts Karnataka at the M Chinnaswamy Stadium in Bengaluru today!

Hyderabad Vs Rajasthan at Uppal, Hyderabad : Defending Champions Rajasthan are almost through to the Semi-Finals this year as well having bundled out hosts Hyderabad for just 144 on Day 3. Hyderabad has conceded a huge first innings lead with Rajasthan putting up a healthy total of 421 batting first. The top scorer for Hyderabad in their first innings was Skipper DB Ravi Teja who made 67. The Hyderabadi first innings was demolished by 23-year-old left-arm spinner Gajendra Singh.

It was a solid show from Hyderabad in their second innings after being asked to follow on. And despite ending the third day’s play at the Rajiv Gandhi International Stadium in Uppal at 138 for no loss, a quarter-final knock out for Hyderabad is inevitable. Openers P Akshath Reddy with 77* (from 136 balls with 9 fours and 2 sixes) and Skipper DB Ravi Teja with 58* (from 123 balls with 4 fours) have struck unbeaten fifties for Hyderabad to reduce the deficit to 139 runs.

Madhya Pradesh Vs Mumbai at Indore : This 3rd Quarter-Final at the Holkar Cricket Stadium is heading towards a draw as hosts Madhya Pradesh ended the third day’s play at a solid 250 for 3 in their second innings. The hosts are leading by just eight runs and will have to bat well for another session atleast to secure a draw. India ODI discard, Wicket Keeper Naman Ojha who opened the batting top scored for MP with 85 from just 83 balls with 9 fours and 4 sixes. Mohnish Mishra (61*) and Udit Birla (55 from 63 balls with 9 fours) also scored half centuries for the homeside.

Earlier in the day, Mumbai finished their first innings at 434 all out with no.9 Ankeet Chavan bringing up a career best of 102* (from 188 balls with 9 fours and a six). Overnight batsman Kaustubh Pawar added only one run to his Day 2 score of 160 not out. Medium pacer TP Sudhindra finished with a five-wicket haul for MP.

Having taken a first innings lead, Mumbai are almost there into the Semi Finals. 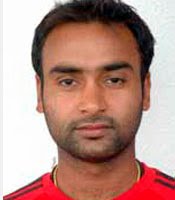 Karnataka Vs Haryana at Bangalore : The Amit Mishra led Haryana team has stormed into the Ranji Semi-Finals by pulling off a shock win over hosts Karnataka at the M Chinnaswamy Stadium in Bengaluru today! Haryana won the 2nd Quarter-Final by six wickets after bowling out Karnataka for just 262 and leaving themselves a modest target of 142.

The third day’s play started with Karnataka at 122 for 3 having conceded a first innings lead of 121 runs. It was a batting collapse from the hosts as they lost their remaining seven wickets without adding too many runs. Medium pacer Sachin Rana took three wickets while most of the other bowlers chipped in with a wicket or two for the visitors.

The run chase of 142 was done and dusted in 36.2 overs by Haryana with opener and wicket keeper Nitin Saini scoring 52 from 70 balls with 8 fours.

Maharashtra Vs Tamil Nadu at Chennai : Tamil Nadu are almost through to the Semi-Finals having taken a first innings lead. The hosts are now looking to win their Quarter-Final match against Maharashtra on the final day tomorrow at the MA Chidambaram Stadium in Chepauk, Chennai. Maharashtra are at a solid 90 for no loss with Chirag Khurana on an unbeaten 55 but they still trail by 93 more runs. The visitors may not stop TN from reaching the Semis but they can atleast force a draw by batting atleast two and a half sessions on the final day.

Earlier, Tamil Nadu finished their first innings at 415. None of the batsmen went onto score a century and apart from Day 2 half centuries from the openers, lower-order bat Yo Mahesh joined the party scoring 59 from 111 balls with 10 fours.