Has the ti(d)e finally turned for South Africa?

Close games and South Africa have a long history and, sadly for the Proteas, it has not been a chronicle they would be proud of. It all began in 1992 when they were

Close games and South Africa have a long history and, sadly for the Proteas, it has not been a chronicle they would be proud of. It all began in 1992 when they were knocked out of the World Cup courtesy an incomprehensible rain rule. In 1999, Lance Klusener’s mad dash could not take them into the final and in 2003, they embarrassed themselves by misreading the Duckworth/Lewis target to be knocked out of the event in the year they were hosting the competition.

South Africa’s opponents in the do-or-die clash on Friday had also stood in their way of glory in the past. During the 1996 World Cup, South Africa headed into the quarter-finals having won all their league games, but one sensational century by Brian Lara put them out of the event, which they went into as favourites. In the Champions Trophy as well, West Indies have stalled South Africa’s march in the recent past. During the 2006 edition in India, the Proteas looked set to make it to the finals when they took on the West Indies in the semi-finals, but this time Chris Gayle did a Lara, and sent South Africa packing. 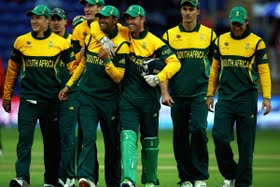 The history of faltering in close matches would have played heavily on South Africa when they were facing West Indies in the must-win (or at least must-tie match) at Cardiff. The fact that Windies have been a taboo team for them in the past would also have been at the back of their minds. But West Indies literally played into South Africa’s hands when Kieron Pollard fell going for a big stroke. It is a known fact now that had Pollard stayed on, West Indies would have progressed. Of course, no one can blame Pollard for Windies’ ouster since it was a just a stroke of bad luck. And, no one would understand that better than the South Africans.

While there is some truth to the chokers tag attached with the South African team, it is an equally accurate assumption that they have been unlucky. They were definitely unlucky in 1992 with the rain rule. As for the 1999 World Cup semi-final, it was just ill-fate that put them out. On a couple of other occasions, they bowed down to scintillating individual performances. In such a scenario, they ideally needed the stroke of luck to go their way as opposed to in the other direction. The lucky tie against West Indies gave them exactly that.

Now that they are through to the semis, South Africa must make sure they make the most of the opportunity. They still have a major point to prove, having never won an ICC trophy since their triumph in the inaugural Champions Trophy in 1998. With most of the other sides, with the exception of India, looking vulnerable South Africa have a great chance to lay their hands on the crown this time. Being remembered as winners of the inaugural and concluding Champions Trophy can be a sureshot way of South Africa shedding away the unwanted of chokers!