Jamaica Test: India should be extremely disappointed with draw

Going into the last two days of the Jamaica Test, it seemed only rain could save West Indies

Going into the last two days of the Jamaica Test, it seemed only rain could save West Indies. All India needed were a couple of sessions of play on the final day, after having claimed four West Indian wickets on the penultimate day of the Test. However, things did not quite go according to plan for the visitors on the last day at Kingston, Jamaica. They got in a full day’s play on the last day, against all expectations. Yet, they failed to claim the six wickets needed for victory. Rather shockingly, they managed only two, adding to the growing list of matches their bowlers failed to win for them.

While the West Indies quartet of Jermaine Blackwood, Roston Chase, Shane Dowrich and Jason Holder deserve a lot of credit for the thwarting the Indians, and giving away just two wickets in the entire day’s play, the Indian bowlers should be extremely disappointed with their effort. For an attack that is no greenhorn by any stretch of the imagination, the failure to get six wickets on a last day pitch should hurt. There was enough help in the surface for the Indian bowlers, and Jamaica is a result-oriented pitch as history shows. Yet, the Indians could not overcome a stubborn Windies challenge. 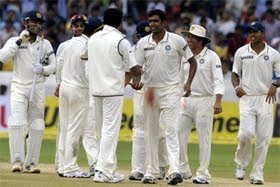 One of the main reasons Virat Kohli has been playing five genuine bowlers is because he wants his team to have the best opportunity to claim all 20 wickets. But, in spite of the move India could not produce the desired results. All five bowlers were extremely disappointing on the day, as their figures would indicate. Ishant Sharma finished with 1 for 56 from 18, Mohammed Shami claimed 2 for 82 from 19, Amit Mishra 2 for 90 from 25, Ravichandran Ashwin 1 for 114 from 30, and Umesh Yadav none for 44 from 12.

Apart from some good bowling, the success of India’s bowlers in the earlier innings were also aided by the fact that West Indies’ batsmen did not show the resolve to hang on. On the final day of the Kingston Test, they did so, and India did not have the answers. The Indians were taken aback by the fight shown by the West Indian batsmen, and they did not have any alternate plan in place to deal with the newfound West Indian determination. As a result, they lost a great opportunity to win back-to-back Tests.

West Indies’ excellence put on the backburner some excellent performances by India in the Test, especially their batsmen. Lokesh Rahul grabbed his opportunity with both hands to score a career-best 158. India will now have a tough ask to choose between Rahul, Shikhar Dhawan and Murali Vijay for the next Test. Ajinkya Rahane also stood up once again, and carved his way to his seventh Test hundred. However, a number of other Indian batsmen like Shikhar Dhawan, Cheteshwar Pujara and Virat Kohli disappointed, getting out after getting starts. In the end, it was their inept bowling that let down though.