Sri Lanka's coach Nic Pothas has hit out at the team after they lost the third ODI against Pakistan by 10 wickets to concede a 3-0 lead in the five-match series. Sri Lanka scored only 208 and Pakistan sailed home rather easily.

"I expect things to change. I am interested in picking character. We have to speak with the selectors and find out whether we have characters in that room. We saw what happened in the Test series. Once you have good character and fighters, things happen.

“At the moment, maybe harsh to say, maybe I have not seen it as yet from this group. I may be speaking out of turn, but I am not too sure whether too many people have booked the ticket for the World Cup," Pothas was quoted as saying in a Cricbuzz report. 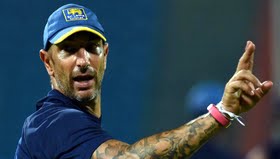 Sri Lanka batting has been a major problem over the last many days, and Pothas is aware of the same. Asked about it, he says, "We can have so many meetings and that many practices, but once you cross that line, you need to show little bit of fight. It's a tough situation. We have seen the same thing happening over and over again and something needs to change.”