Where has all the magic gone for MS Dhoni?

Not so long ago, MS Dhoni was referred to as Captain Cool! Thought to be a man who can calmly make his moves inspite of being in pressure cooker situations...and with those very moves Dhoni was able to change the fortunes of a match!

Not so long ago, MS Dhoni was referred to as Captain Cool! Thought to be a man who can calmly make his moves inspite of being in pressure cooker situations...and with those very moves Dhoni was able to change the fortunes of a match! He was appreciated as someone who makes things happen with his captaincy but now the same Dhoni is being fired with criticism from all quarters that under tough conditions, he becomes too defensive...and that his bowling and fielding plans are lacking any sharpness and novelty.

The current Australian tour isn’t the first occasion where MS Dhoni’s captaincy has been criticized. Infact his captaincy in Tests has come under scrutiny since more than one year, especially on overseas tours. When faced with tough conditions overseas, Dhoni has struggled to create any impression on the team with his leadership skills. According to former cricketers like Sunil Gavaskar and others, batting and bowling failures are not the only reasons for India’s defeats in the Melbourne and Sydney Tests but also Dhoni’s defensive captaincy and wrong tactics. 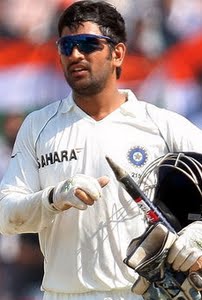 Having pounded Dhoni with severe criticism at this bad times of Indian Cricket, its not fair to blame him alone for the defeats. However, as a leader, its upto Dhoni to sharpen up his team and make his players pull up their socks. Will Dhoni prove that he is still the great leader that he was once called as ?

This is how MS Dhoni has faltered in the recent times in Test Cricket :

In South Africa : A golden opportunity was messed up by Dhoni’s team when the scoreline after two Test matches in a 3-Test Series was leveled at 1-1. In the deciding final Test at Newlands in Cape Town, South Africa was under pressure at 64 for 4 in their second innings. The overall lead for the Proteas was only 62 with Harbhajan Singh on fire taking all the four wickets to fall.

With the match hanging in the balance, an injured Jacques Kallis played a couple of full-blooded sweeps to release the pressure and Dhoni got so terrified that he began spreading the field! With that, the pressure was taken off on the pair of Kallis and Boucher and with ease they rotated the strike and helped South Africa to pile up 341 from 64 for 4! India was left with a difficult target of 340 to get and the match ended in a draw after all those fiery blows at the start from Harbhajan Singh.

In West Indies : In the third and final Test at the Windsor Park in Roseau, Dominica - Dhoni’s team having secured the series with a lead of 1-0 needed 180 for a victory. At a stage when India needed 86 runs to win from 90 balls in the final hour, Dhoni decided to call off the game despite himself, Virat Kohli and Harbhajan still to bat. The match ended in a draw with two specialist batsmen Dravid and Laxman at the crease. This decision from Dhoni to settle for a draw came as a very defensive one.

In England : In the first Test match at Lord’s, India bounced back strongly with the ball having conceded a first innings lead of 188 runs. In the second innings, Ishant Sharma rattled the middle order taking three quick wickets as England slipped to 62 for 5 just few minutes before lunch on Day 4.Instead of finishing up England cheaply by persisting with Ishant, Dhoni gave the ball to Suresh Raina and Harbhajan Singh after lunch.

It was only after 12 overs that Dhoni brought back Ishant and he responded with the wicket of Eoin Morgan. However, the other new batsman Matt Prior got his eye in by then and went onto score an unbeaten century to help England leave India with a target of 458. India got bundled out for 261 to end up losing that First Test.

In Australia : During the First Test at the MCG, Australia were in trouble at 197 for 9 with an overall lead of just 246 runs at the time of a well set Michael Hussey’s departure. The last pair of Pattinson and Hilfenhaus was there at the crease and weren’t expected to add anything significant. However, MS Dhoni fumbled as he put his fielders back which leaked crucial singles and twos for Pattinson and the Aussies went onto add 43 runs for the last wicket! That left India with a difficult target of 292 to which they fell short by 122 runs to lose the First Test.

In the Second Test at Sydney, Zaheer Khan brought India back in the Test by reducing Australia to 37 for 3. Dhoni struggled to keep up the pressure on the pair of Ponting and Clarke with his ineffective field placements which allowed a partnership to blossom. On the second day with Australia still in danger at 116 for 3 in reply to India’s 191 were allowed to get away because of too defensive field set ups which were there only for bad bowling and not to take wickets! What happened after that is history with Michael Clarke scoring a maiden triple century and India surrendering the Test meekly on the fourth day to go 0-2 down!