Batsman Jonathan Trott has been named as the England and Wales Cricket Board (ECB) men's cricketer of the year, as chosen by the British media.

Batsman Jonathan Trott has been named as the England and Wales Cricket Board (ECB) men's cricketer of the year, as chosen by the British media.

Batter Lydia Greenway is the women's cricketer of the year with Umesh Valjee winning the disability award.

Warwickshire's Trott, 30, has taken his Test average up to an impressive 66.77 in the past 12 months, with his one-day international average at 55.65. 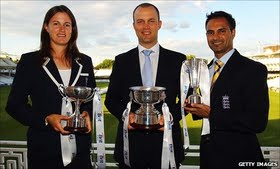 Trott was a key member of the side which retained the Ashes in Australia.

It was the first time England had won on Australian soil for 24 years.

He is currently third in the International Cricket Council's world rankings of Test batsman and seventh in their one-day list.

England's number three batsman hit a total of four centuries, including a superb 226 against Bangladesh last summer, during the 12-month spell the awards cover.

The awards cover the period from the start of last year's international summer in May to the end of the recent World Cup.

Trott also struck three one-day hundreds in that time, and five half centuries in the World Cup.

Having beaten his captain Andrew Strauss and team-mates James Anderson, Alastair Cook and last year's recipient Graeme Swann to an award based on votes from the cricket media, he said: "I am both extremely humbled and proud to have been named England cricketer of the year after what has clearly been the most enjoyable year of my cricketing career so far.

"It is an honour to represent England and it has been a privilege to be involved in such a successful, hard working team.

"I wouldn't have won this award without the commitment and support of my team-mates.

"This award really belongs to the entire England squad and management team that have provided such a supportive and professional environment that has allowed me to prosper as a cricketer and a person."

Trott currently has the highest Test batting average of anyone in history bar Sir Donald Bradman, among players who have won as many or more caps.

Asked whether they can move up from their present position at number three to become the top-ranked Test team in the world, he said: "I think it is definitely manageable.

"We are going to have to maintain the form we did through the Ashes.

"I am very hesitant to use the word 'special'.

"But with this group of guys at the moment, I think we might have the potential to push towards that.

"We definitely have the characteristics and desire of a group of players that one day may be able to be described in that sort of way."

As for the progress of his own career, he added: "You just have to prove it to yourself, and others.

"I'd had a great start [with an Ashes-clinching hundred on debut in 2009], and then maybe didn't do as well as I would have liked that winter in South Africa and Bangladesh.

"No-one's got a right to score runs at any stage. You always believe you can do it, but proving it can be the difficult part."

Trott was also praised by England team director Andy Flower for his efforts in the first Test against Sri Lanka earlier this week in Cardiff where he scored 203 to help the home side claim a famous win.

"Certainly I thought this was a superb innings by him - patient, efficient, and he put the bad balls away," said Flower.

"He set the tone not only for this game but the series and, we hope, batting for the summer.

"Any criticism of him in this instance is unfounded.

"He has been a very solid man to have in our side. I know he's been criticised for his strike rate in one-day cricket. I think in most cases that has been unfair."